LOS ANGELES — An emergency hearing for a mistrial was held Thursday in a Los Angeles courtroom where Robert Durst is on trial for the murder of his friend, Susan Berman.

Defense attorneys for the real estate heir cited health issues. Although Durst has said he wishes to take the stand in his own defense, his lawyers argued that testifying could literally kill their client.

Dr. Keith Klein, a kidney specialist who also practices internal medicine, took the stand saying Durst could die under cross-examination. At the very least, he said it would cause his patient’s health to further deteriorate. According to Dr. Klein, Durst has bladder cancer, chronic lung disease, significant cardiac disease, gastric problems that impair his ability to absorb nutrients, kidney disease, kidney stones, and an infection in his kidney, among other ailments.

The doctor estimated that Durst, 78, has a life expectancy of three years with medical treatment.

Dr. Klein also noted that aside from his physical ailments, Durst is cognitively impaired. He said Durst’s recollection of events was questionable, and that his testimony would certainly be flawed.

Dr. Klein admitted he was paid to testify. 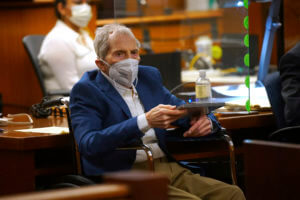 Robert Durst holds a device to read the real time spoken script as he appears in the courtroom of Judge Mark E. Windham as attorney’s begin opening statements in the trial of the real estate scion charged with murder of longtime friend Susan Berman, in Los Angeles County Superior Court Tuesday, May 18, 2021, in Inglewood, Calif. Durst’s murder trial was delayed more than a year due to the Covid-19 pandemic. (Al Seib/Los Angeles Times via AP, Pool)

The prosecution in Durst’s Los Angeles case expressed its frustration with the defense’s multiple mistrial requests over the last 18 months.

“What this is not a request for mistrial,” said prosecutor John Lewin. “What this really is, is a request for Mr. Durst to get a go home, get out of jail free card, and never be tried again.”

Lewin pointed out that while Durst may have some chronic health conditions, the eccentric multi-millionaire is fully-engaged in trial and does not currently require hospitalization.

“Mr. Durst had very serious cancer in 2005,” continued Lewin. “He’s still here. He will probably outlive us all.”

The judge will make a ruling regarding the request for a mistrial on Monday, August 2.

Prosecutors believe Susan Berman provided an alibi for Durst back in 1982 after he killed his first wife, Kathie. They argue he killed Berman in December 2000 to stop her from telling police what she knew about Kathie’s disappearance. Durst has pleaded not guilty.

In October 2001, Durst fatally shot his neighbor Morris Black in Galveston, Texas. Durst had relocated to Galveston to evade New York authorities who had reopened the investigation into Kathie’s disappearance.

Durst was acquitted of murder in that case after testifying under oath that he killed Black in self-defense. He served jail time for chopping Black’s body up and tossing it into Galveston Bay, as well as jumping bail.