LOS ANGELES (AP) — The savage and sloppy manner in which Robert Durst dismembered a man he accidentally killed in Texas helps prove the New York real estate heir didn’t murder his best friend or kill his wife, his lawyer said.

Durst’s amateurish efforts to dispose of the body of Morris Black after fatally shooting him in Galveston in 2001 left a trail of evidence — unlike the clinical crime scene where Susan Berman’s body was found or the absence of clues when his wife vanished, attorney Dick DeGuerin said Wednesday.

A garbage bag floating in Galveston Bay with one of Black’s body parts contained a receipt with Durst’s name on it, blood from the drifter was discovered in his car, and DNA of the man was found at the crime scene in the multimillionaire’s $300-a-month apartment.

DeGuerin, who represented Durst in the Texas trial in which he was acquitted of murder after claiming he shot Black in self-defense, is aiming for a repeat in Los Angeles, where Durst is charged with murder in Berman’s fatal shooting in 2000.

While prosecutors are using the killing of Black as evidence that Durst also knocked off Berman in his efforts to avoid prosecution in his wife’s suspected killing in New York in 1982, the defense is trying to use the Texas case to its advantage.

The trial began in March 2020 but was adjourned after six days because of the pandemic. It resumed this week in Inglewood with lawyers making abbreviated opening statements to remind jurors about the evidence. 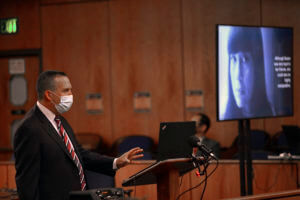 Deputy District Attorney John Lewin on Tuesday said the three killings are intertwined and Berman and Black were killed to help cover-up the killing of Durst’s wife.

“In essence, all three are interrelated,” Lewin said. “Everything starts with Kathie Durst’s disappearance.”

Durst has long been suspected of killing Kathie Durst but has never been charged and has denied any role in her disappearance. She’s never been found.

DeGuerin said there was no evidence Durst killed his wife or that Berman had helped him cover his tracks by posing as Kathie Durst in a phone call to the dean of the medical school where she was a student.

“Kathie Durst disappeared without a trace,” DeGuerin said. “It was and is a mystery.”

Durst fled New York and went into hiding in Texas in November 2000 after Westchester prosecutors reopened the investigation into Kathie Durst’s suspected death. He disguised himself as a mute woman and rented an apartment next to Black.

Black was killed because he discovered Durst’s identity, Lewin claimed.

But DeGuerin repeated the defense that won over jurors in Galveston in 2003: Black pulled Durst’s gun on him and was shot in a struggle for the weapon.

After the killing, Durst smoked pot and drank Jack Daniels whiskey and then went to a hardware store, where he purchased a bow saw, a paring knife, garbage bags and painter’s drop cloth to keep things tidy while he hacked up the body, DeGuerin said.

A sickly Durst, 78, seated in a wheelchair in a blue sport coat, faced the jury as DeGuerin described the “awful, awful” dismemberment. Durst blinked occasionally but no outward sign of emotion was discernible behind his white mask.

DeGuerin said Durst then did what he’s done much of his life: he ran just as he had from his rich but dysfunctional family’s mansion as a child.

He fled to New Orleans but was arrested when he returned to Galveston to pick up a pair of glasses waiting at an optometrist office.

“He doesn’t make good decisions,” DeGuerin said repeatedly, blaming it partly on a diagnosis that Durst is on the autism spectrum and doesn’t interact normally.

Lewin has scoffed at that explanation and played a clip of an interrogation in which Durst acknowledged it was something a psychiatrist made up. Later in the interview, though, Durst said he didn’t like communicating with people.

DeGuerin said Durst had nothing to do with Berman’s killing.

“Bob Durst did not kill Susan Berman and he doesn’t know who did,” he said. “Bob Durst had no motive and nothing to gain by the death of Susan Berman.”

Berman, the daughter a Las Vegas mobster who was a writer, had been best pals with Durst since they met on the campus of the University of California, Los Angeles, in the 1960s. DeGuerin showed a photo of a younger bearded Durst, his smiling wife and a beaming Berman at one of her book launches. 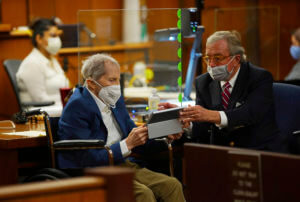 Defense attorney Dick DeGuerin, right, gives Robert Durst a device to read the real time spoken script as he appears in a courtroom as Judge Mark E. Windham gives last instructions to jurors before attorneys begin opening statements at the Los Angeles County Superior Court, Tuesday, May 18, 2021, in Inglewood, Calif. Durst, 78, is charged with one count of murder — in the killing of his best friend, Susan Berman, in 2000 in her Los Angeles home. (Al Seib/Los Angeles Times via AP, Pool)

Lewin said Berman told friends she helped Durst cover up the killing by phoning in sick for Kathie Durst the day after she was last seen — providing evidence she was alive the day after her husband said he put her on train back to New York City after a weekend at their lakeside cottage.

But DeGuerin said Berman was famous for embellishing stories with lies. Even her friends didn’t believe what she told them.

“She was a fabulist. She made up stories,” he said. “She told lies day in and day out.”

DeGuerin said Durst discovered Berman’s body when he showed up at her house in Benedict Canyon just before Christmas. The back door was open and she was lying on her back with blood pooled under her black hair.

Durst “freaked out,” fearing the killer might be there and fled, DeGuerin said. But before leaving town, Durst sent a handwritten note to police with Berman’s address and the word “CADAVER” written in block letters so she’d be found.

Until the admission by his lawyer, Durst had always denied writing the note or being at the crime scene. He even told documentary filmmakers and investigators that only the killer could have written the cadaver note.

DeGuerin tried to discredit the filmmakers and suggest that Durst was “playing” with investigators during an interrogation.

Lewin will get his chance to press Durst on it later in the trial. DeGuerin said he would testify.