BRUNSWICK, Ga (Court TV) – A jury of 12 have been selected in the murder trial of Ahmaud Arbery’s accused killers. Ahead of the opening statements, the court will hear arguments on outstanding motions. The defendants’ “use of force” experts, introducing polygraph examinations, and the victim’s toxicology report on the date of the incident, are some of the motions being discussed.

12 women and four men make up the entire panel of jurors, although alternate jurors have not yet been decided. The jury panel consists of 11 white people and 1 Black person.

Lawyers for defendants Gregory McMichael, Travis McMichael and William “Roddie” Bryan did not try to move the trial to another county. In interviews with Court TV, they said they are hopeful they can find a fair and impartial jury in Glynn County, the coastal community in southeast Georgia where Arbery was killed. 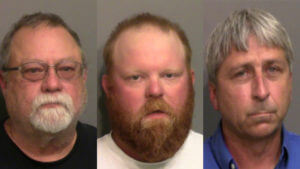 The defendants are individually charged with nine offenses for Arbery’s shooting death on February 23, 2020.

Prosecutors claim Arbery, 25, was out for a jog when the McMichaels grabbed their guns, jumped in a truck, and chased Arbery through the Satilla Shores neighborhood of unincorporated Glynn County. Bryan joined the chase and started filming with his cell phone, capturing the final moments of Arbery’s life.

The defense claims the McMichaels sought to detain Arbery, thinking he was a burglary suspect. Bryan claims he joined the chase and began filming to document the incident, and he had no intention of assisting the McMichaels in any crimes.

A preliminary questionnaire was sent with jury summonses to 1,000 Glynn County residents, according to the clerk’s office. It includes questions typically asked of prospective jurors in any case, such as how much they think they know about the case and where they get their information from. Other questions go at the heart of this case, including whether they have viewed the shooting video, if they have visited Satilla Shores since February 2020, or if they know anyone who lives there.

Jurors will be anonymous throughout the trial, from jury selection to verdict. The media is not allowed to show their faces, and the court will refer to them by assigned numbers to protect their identity.

Jury selection began with general questioning, addressing obstacles to serving, such as scheduling conflicts, work or childcare. After general questioning, lawyers got a  chance to question them alone about bias toward either side, which would prevent a potential juror from being fair and impartial.

From there, each side typically gets nine strikes to use against those they don’t want on the jury. Because there are multiple defendants in this case, the defense could get more strikes.

The world will watch a prosecution that almost didn’t happen. The first outside prosecutor to review the incident concluded the McMichaels’ actions were justified under Georgia’s citizen arrest law. The Georgia Bureau of Investigation stepped in after Bryan’s video went viral in early May 2020, leading to the arrests of the McMichaels on May 7 and of Bryan on May 24. By the time the men were indicted on nine counts in June 2020, the case had changed hands four times amid concerns over conflicts of interest and the case’s magnitude. Prosecutors from the Cobb County District Attorney’s Office are trying the case at the direction of the Georgia Attorney General’s office.

Arbery’s death led to the repeal of the original citizen’s arrest statute, the enactment of a new hate crime law in Georgia, and the indictment of former Brunswick Judicial Circuit District Attorney Jackie Johnson on charges of obstruction and violating her oath of office. Meanwhile, over months of pretrial litigation, contrasting narratives formed over what the video shows. While prosecutors portray the defendants as racist vigilantes who counted on Gregory McMichael’s law enforcement ties to shield them from criminal liability, lawyers for the defendants intend to rely on the citizen’s arrest statute to support their claim of self-defense.