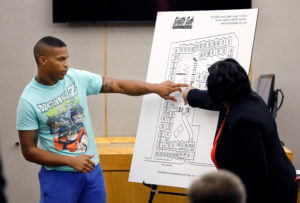 Three men have been charged with capital murder in the killing of a witness who testified at the murder trial of a Dallas police officer who shot and killed her unarmed neighbor in his home.

The Oct. 4 shooting of Joshua Brown happened days after Amber Guyger was convicted and sentenced to prison for the 2018 killing of Botham Jean, whose apartment she said she mistook for her own. Brown’s death set off feverish speculation that he may have been killed for testifying for the prosecution, though police say his death had nothing to do with the Guyger case and was the result of a drug deal gone bad.

Police have said the three Alexandria, Louisiana, men were in Dallas to buy drugs from Brown. Jacquerious Mitchell told police that Brown shot him in the chest after Green and Brown began fighting during the drug deal, and that Green then shot Brown twice, Assistant Dallas Police Chief Avery Moore said in October.

Michael and Jacquerious were arrested days after Brown’s death and remain in the Dallas County Jail. Police are still looking for Green.