LONDON (AP) — The British serial killer known as the “Yorkshire Ripper” died Friday, reviving unsettling memories of a killing spree that bred fear across northern England in the late 1970s. He was 74. 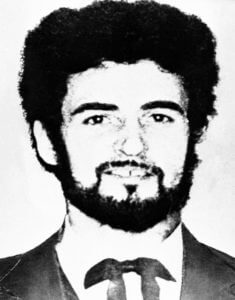 Peter Sutcliffe was serving a life sentence for the killings of 13 women in Yorkshire and northwest England between 1975 and 1980. British media reported that he had refused treatment after testing positive for COVID-19 and was suffering from a number of underlying health conditions.

Sutcliffe’s barbaric attacks on young women were compounded by police failures that allowed him to evade arrest and continue killing. The manhunt for the Ripper was one of the biggest in British history, with some 2.5 million hours spent trying to catch him. But inquiries later chronicled how stubborn investigators stuck to their early theories about the case, missing key leads, ignoring contradictory evidence and wasting time.

News of Sutcliffe’s death revived the anger of many who lived through those years.

Richard McCann was 5-years-old when his mother, Wilma, became Sutcliffe’s first murder victim. Photos of Wilma have been shown repeatedly over the past four decades whenever Sutcliffe was in the news, reminding McCann of his young mother, who just 28 when she died near their home in Leeds.

“One positive to come from this is that we’ll hear much less about him and no more reminders about what happened all those years ago,” McCann told the BBC.

Sutcliffe, who left school at 15, worked menial jobs before becoming a grave digger and truck driver. His attacks began in July 1975 in the West Yorkshire town of Keighley, where he beat a woman with a hammer then slashed her with a knife. A month later, another woman was found with similar injuries, 12 miles away in Halifax.

Wilma McCann, a sex worker, was also attacked with a hammer and then stabbed two months later, becoming the victim of Sutcliffe’s first known slaying on Oct. 30.

“After that first time, I developed and played up a hatred for prostitutes in order to justify within myself a reason why I had attacked and killed Wilma McCann,” Sutcliffe later told police. 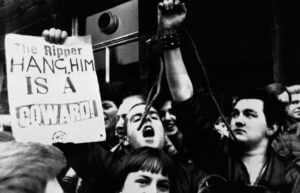 FILE – In this Jan. 5, 1981 file photo, two youths, one holding a noose, right, stand outside Dewsbury Magistrates Court, where Peter William Sutcliffe, 35, was remanded in custody for eight days, charged with the murder on Nov. 17, 1980 of 20-year-old student Jacqueline Hill, who has been described as the 13th victim of the Yorkshire Ripper. (AP Photo/Pyne, file)

His actions continued unchecked until his arrest on Jan. 2, 1981, in the English city of Sheffield. Sutcliffe admitted he was the Ripper during an extraordinary 24-hour interview with police, but during his trial he denied the killings.

On May 22, 1981, at London’s Central Criminal Court, Sutcliffe was convicted of 13 murders and seven counts of attempted murder. He was sentenced to 20 concurrent life terms.

A report two decades later concluded that Sutcliffe probably committed more crimes than those for which he was convicted.

Sutcliffe later expressed surprise that he was able to carry on for so long.

“It was just a miracle they did not apprehend me earlier — they had all the facts,” he said.

One reason police failed to arrest Sutcliffe earlier was because senior officers were misled by a hoax tape and letters from someone claiming to be the ripper.

Later inquiries also found that officers were overwhelmed with information, and a card system created to track the data was improperly cross-referenced, causing key facts to be misplaced. Details about Sutcliffe’s appearance, such as a gap between his teeth and his size 7 feet, weren’t flagged.

Police actually interviewed Sutcliffe nine times before his arrest. During one of those interviews, officers showed him a picture of the Ripper’s boot print near one of his victims, but they failed to notice that he was wearing the boots in question.

In another blunder, a woman who survived one of Sutcliffe’s attacks, Marcella Claxton, helped police produce a drawing of the suspect that later proved to be accurate. But her testimony was discounted by police, who thought she wasn’t a Ripper victim because she wasn’t a prostitute.

Among their many mistakes, senior officers investigating the case remained preoccupied with the theory that the Ripper primarily targeted sex workers who weren’t “innocent” victims.

Family members said this attitude compounded their grief. They , and they used the spotlight of Sutcliffe’s death to demand that the West Yorkshire Police apologize for the language and tone officers used to describe the victims.

Richard McCann said that when 16-year-old Jayne MacDonald was killed in 1977, police called her the Ripper’s first “innocent” victim. 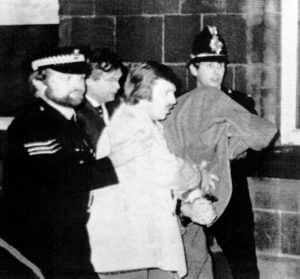 “It really affected me,″ he said. “I was ashamed of being associated with Sutcliffe and all his crimes and, possibly to do with the way that lots of people in society looked down, and the police and some of the media — describing some of the women as innocent and some not so innocent.″

Hours after Sutcliffe died, Chief Constable John Robins of the West Yorkshire Police, apologized for the “distress and anxiety caused to all relatives by the language, tone and terminology used by senior officers at the time.’′

“Such language and attitudes may have reflected wider societal attitudes of the day, but it was as wrong then as it is now,″ he said. “A huge number of officers worked to identify and bring Peter Sutcliffe to justice and it is a shame that their hard work was overshadowed by the language senior officers used at the time, the effect of which is still felt today by surviving relatives.”

Brian Booth, chairman of the West Yorkshire Police Federation, said many of his colleagues who grew up in the 1970s were motivated to become police officers because they wanted to protect the community from people like Sutcliffe.

“As a child in West Yorkshire, when he was on his reign of terror, I can say his activities caused fear throughout the region,” Booth said. “My heart goes out to all the families affected through the loss of their loved ones, but I personally will not be mourning the death of this monster.”