OKLAHOMA CITY (AP) — The U.S. Supreme Court has reaffirmed that its ruling to limit state jurisdiction for crimes committed on tribal reservations by or against tribal citizens is not retroactive. 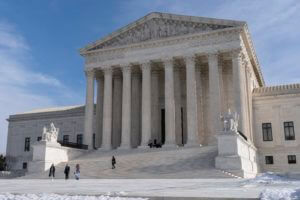 Also Tuesday, the court again rejected a request by the state of Oklahoma that it overturn what is known as the McGirt decision.

The rulings come after a McAlester couple who are members of the Choctaw Nation filed a federal lawsuit against the Oklahoma Tax Commission alleging that they are exempt from state income taxes due to McGirt.

Harold and Nellie Meashintubby claim in the lawsuit filed Friday in the Muskogee federal court that past treaties prohibit states from passing laws governing the Choctaw Nation and that no act of Congress has allowed states to do so.

The Meashintubbys have filed for exemptions from state income taxes twice since 2017 and were denied both times, according to the lawsuit.

Oklahoma Tax Commission officials did not immediately reply Wednesday to messages seeking comment. The Tulsa World reports that a tax commission spokeswoman declined to comment on the legal action.