NEW YORK (AP) — With Wednesday’s guilty verdict in the sex-trafficking trial of Ghislaine Maxwell, here’s a look at what the once high-flying Jeffrey Epstein confidante was accused of and what’s next for her: 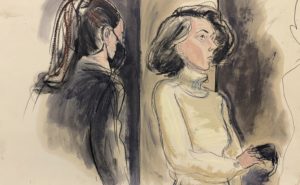 Ghislaine Maxwell, right, sits with her mask off during a break in her sex trafficking trial, Monday, Dec. 20, 2021, in New York. (Elizabeth Williams via AP)

WHO WERE GHISLAINE MAXWELL’S ACCUSERS?

The prosecution hinged on the accusations of four women — Annie Farmer and the pseudonymous Jane, Kate and Carolyn — who say they were teenagers when Maxwell and Epstein sexually exploited them in the 1990s and early 2000s.

ON WHAT CHARGES WAS GHISLAINE MAXWELL CONVICTED?

The trial focused on six counts:

She was convicted on all charges except the second count, despite her lawyers’ assertions she was just a patsy.

WHY WAS SHE ACQUITTED ON ONE COUNT?

Without public statements from the jurors, who have yet to come forward, it’s impossible to say for sure. But the second count, enticement of a minor to travel to engage in illegal sex acts, was perhaps the most ambiguous of the charges levied. Maxwell was accused of having “enticed” Jane to New York City, arranging flights and offering gifts, knowing that Epstein would abuse her. During deliberations, the jury seemed to be hung up on this count, asking for the definition of “enticement” in a note.

HOW EXACTLY DO YOU PRONOUNCE ‘GHISLAINE’?

Hard “g,” silent “s.” Think “ghee,” like the clarified butter. If it helps, the cover of the New York Post — run by Rupert Murdoch, a rival of Maxwell’s late media baron father — the day after the verdict: “GHILTY!”

HOW MUCH PRISON TIME DOES GHISLAINE MAXWELL FACE?

The most serious count on which the 60-year-old was convicted carries up to 40 years in prison. The count on which she acquitted was fairly minor, carrying a five-year maximum.

SO WHAT’S NEXT FOR GHISLAINE MAXWELL?

She needs to be sentenced, but a date has yet to be set. A family statement the night of the verdict said an appeal had already been started. And she faces another trial, on two counts of perjury that were spun off from her indictment.

WHY IS GHISLAINE MAXWELL CHARGED WITH PERJURY?

Those counts are based on her answers during 2016 depositions in a since-settled lawsuit brought by accuser Virginia Giuffre. She’s accused of lying by saying “I don’t know what you’re talking about” in response to a question about whether Epstein had a “scheme to recruit underage girls for sexual massages.” She’s also accused of lying by saying she didn’t recall whether there were sex toys or devices at Epstein’s Florida home and by saying she wasn’t aware Epstein was having sex with anyone but her. Her lawyers argued those depositions shouldn’t be used at the criminal trial because of a court-approved agreement her answers would stay confidential.

Yes, despite multiple requests for bail, Maxwell was deemed a flight risk and has spent well over a year lodged in a federal lockup in Brooklyn. Her attorneys and family have lambasted jail conditions as punitive and inhospitable to Maxwell’s ability to mount a proper defense. Her attorney asked immediately conviction that Maxwell be given a COVID-19 booster shot because infection rates in her jail were rising dramatically. Once she’s sentenced, she will be moved to a federal prison.

HOW LONG DID THE TRIAL TAKE?

A month. Testimony started Nov. 29; we had a verdict Dec. 29. The whole trial was initially projected to last six weeks, but the witness lists for both sides were dramatically truncated without explanation. The jury took five full days to decide the case.

She told the judge — not without some defiance — that she had no need to testify, as the prosecution had failed to adequately prove their case. The tactic didn’t work out for her, but it’s not an unusual one: High-profile defendants rarely put themselves on the stand, as it opens them up to a lot more scrutiny.

They were romantically involved, but at some point — the timeline is unclear — she says she transitioned to being more of an employee, running his household (Epstein had homes all over the place: Palm Beach, Florida; New Mexico; Manhattan; a private island in the U.S. Virgin Islands; Paris). Prosecutors introduced records showing Epstein had paid Maxwell more than $20 million through the years and accused her of functioning as Epstein’s madam, procuring underage girls to satisfy him sexually.

He’s not. Not exactly, at least, but Maxwell’s conviction isn’t good news for the embattled British royal. Giuffre is suing Andrew, saying he sexually abused her when she was 17. She says Maxwell facilitated her meetings with Andrew, who has denied the account. These accusations were left out of this trial, though Andrew’s name did come up in testimony: a pilot of Epstein’s private jet, dubbed the “Lolita Express” by the news media, testified he had flown Andrew and an accuser confirmed she told the FBI she had flown with the prince, as well.

A mystery man! She was living with him when she was arrested in New Hampshire, but court documents have not made his name public. He did support her bail attempts, but was never spotted at the trial. She had transferred most of her assets to him, but has also told officials they’re in the process of divorcing.

IS ANYONE ON GHISLAINE MAXWELL’S SIDE?

Her family is sticking by her. Her sister Isabel attended each day of proceedings, often joined by other siblings, and her family issued a strong statement of support for their sister after the verdict. Ghislaine is notably the baby of the family and said to have been the favorite of her father, Robert Maxwell, who died falling off a yacht named for her.

According to a website set up by her family, Maxwell has been working through a pile of books. Her reading list runs the gamut of criminal-justice related books like the award-winning “Just Mercy” by Bryan Stevenson to “Licensed to Lie: Exposing Corruption in the Department Justice” by Sidney Powell, a conspiracy theorist and former lawyer for President Donald Trump. She’s also been making her way through Philip Pullman’s “His Dark Materials” fantasy series and popular book club fiction pick “Eleanor Oliphant is Completely Fine,” by Gail Honeyman.