WASHINGTON (AP) — Supreme Court Justice Stephen Breyer’s retirement gives President Joe Biden a chance to make his first nomination to the high court. It’s also a chance for Biden to fulfill a campaign promise to nominate the first Black woman to be a justice.

Some things to know about the women seen as leading candidates: 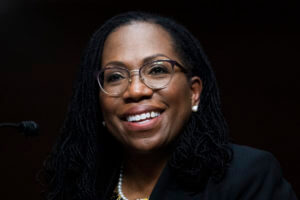 FILE – Ketanji Brown Jackson, nominated to be a U.S. Circuit Judge for the District of Columbia Circuit, testifies before a Senate Judiciary Committee hearing on pending judicial nominations, April 28, 2021 on Capitol Hill in Washington. President Joe Biden has already narrowed the field for his first U.S. Supreme Court pick. One potential nominee is Jackson, 51. She attended Harvard as an undergraduate and for law school. Obama nominated her to be a federal trial court judge, and Biden elevated her to the U.S. Court of Appeals for the District of Columbia Circuit. Early in her career, she was also a law clerk for Breyer.  (Tom Williams/Pool via AP, File)

Ketanji Brown Jackson has known Breyer for decades. A graduate of Harvard and Harvard Law school, she was a law clerk to Breyer from 1999 to 2000. She is comfortable enough with her former boss to have a little fun at his expense. In 2017, after Breyer accidentally brought his cellphone to court and it rang, Jackson introduced him at an event and pretended to get a call mid-introduction from Breyer’s colleague, Justice Neil Gorsuch.

After clerking for Breyer, Jackson was as a lawyer in private practice, worked as a public defender and served on the U.S. Sentencing Commission. President Barack Obama nominated her to be a federal trial court judge in the District of Columbia in 2013. Biden elevated her to the U.S. Court of Appeals for the District of Columbia Circuit, where she has served since June 2021.

Recently, Jackson was part of a three-judge panel that ruled against former President Donald Trump’s effort to shield documents from the House committee investigating the Jan. 6, 2021, insurrection at the Capitol.

Jackson, 51, also has the advantage of a connection to Republicans. She is related by marriage to former House Speaker Paul Ryan, R-Wis. Jackson’s husband, Dr. Patrick Jackson, a surgeon, is the twin brother of Ryan’s brother-in-law. The judge and her husband have two daughters.
___
LEONDRA KRUGER 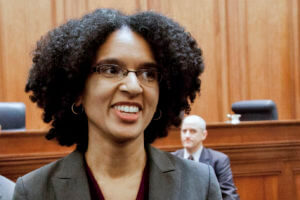 FILE – Deputy assistant U.S. attorney general Leondra Kruger, stands during her confirmation hearing to the California Supreme Court in San Francisco on Dec. 22, 2014. President Joe Biden has already narrowed the field for his first U.S. Supreme Court pick. One potential nominee is Kruger, 45, a justice on the California Supreme Court. A graduate of Harvard and Yale’s law school she served as a law clerk on the high court before arguing a dozen cases before the court as a lawyer for the federal government. But Kruger, whose mother is Jamaican, has also been described as a moderate, which could be a tough sell for some liberal Democratic senators. (S. Todd Rogers/Pool via AP, File)

were to be chosen and confirmed as Biden’s nominee. The last was Sandra Day O’Connor, a barrier-breaker who was the court’s first female justice. During his 1980 presidential campaign, Ronald Reagan had promised to put a woman on the Supreme Court. He fulfilled that commitment in his first year in office when he elevated O’Connor from a state appeals court in Arizona.

Kruger, 45, has been on the California Supreme Court since 2015. She was just 38 when chosen for the job by then-Gov. Jerry Brown. She’s seen as a moderate on the seven-member court.

Kruger grew up in Los Angeles. She is the daughter of a Jamaican mother and Jewish father; both are pediatricians. She attended Harvard before getting her law degree from Yale. Like Jackson, she was a law clerk to a Supreme Court justice — John Paul Stevens.

Before moving back to California, Kruger worked for the Department of Justice. She argued a dozen cases before the Supreme Court on behalf of the federal government, including one involving religious schools’ ability to fire teachers.

Kruger is the first California Supreme Court justice to have a baby while serving on the court. She and her husband have two children.
___
J. MICHELLE CHILDS 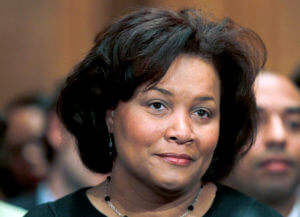 FILE – Judge J. Michelle Childs, who was nominated by President Barack Obama to the U.S. District Court, listens during her nomination hearing before the Senate Judiciary Committee on Capitol Hill in Washington, April 16, 2010. President Joe Biden has already narrowed the field for his first U.S. Supreme Court pick. One potential nominee is Childs, currently a U.S. District Court Judge for Southern California, who has been nominated but not yet confirmed to serve on the U.S. Court of Appeals for the District of Columbia Circuit,. (AP Photo/Charles Dharapak, File)

J. Michelle Childs’ resume doesn’t include a law degree from Harvard or Yale or service on a federal appeals court, common characteristics of the current justices. But she has a powerful backer who has Biden’s ear: Rep. James Clyburn, D-S.C.

Clyburn and Biden are longtime friends. Clyburn’s pivotal endorsement of Biden before South Carolina’s Democratic presidential primary in February 2020 is seen as critical in Biden’s path to the nomination.

Childs, 55, is a graduate of the University of South Carolina School of Law. She has a master’s degree from the school as well as a different legal degree from Duke.

She was previously a state court judge and has served as a federal trial court judge since 2010. In 2014, before the Supreme Court ruled that gay couples had a right to marry nationwide, she ruled in favor of a gay couple seeking to have their District of Columbia marriage recognized in South Carolina. 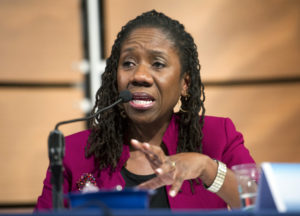 FILE – Sherrilyn Ifill, president and director-counsel, NAACP Legal Defense and Education Fund, speaks at the President’s Task Force on 21 Century Policing, Jan. 13, 2015, at the Newseum in Washington. President Joe Biden has already narrowed the field for his first U.S. Supreme Court pick. One potential nominee is Ifill. She is a deeply respected civil rights attorney who has led the fund since 2013, the second woman to lead the organization. Ifill started her career at the American Civil Liberties Union, then worked on voting rights legislation at the legal defense fund before she joined the faculty at University of Maryland School of Law, where she taught for more than 20 years. (AP Photo/Cliff Owen, File)

If Biden decided to go outside the judiciary, the choice could be NAACP Legal Defense and Educational Fund head Sherrilyn Ifill, 59. She is a deeply respected civil rights lawyer who has held the post since 2013. Ifill, who has announced she will step down in the spring, is the second woman to lead the organization.

Ifill started her career at the American Civil Liberties Union, then worked on voting rights legislation at the legal defense fund before she joined the faculty at University of Maryland School of Law, where she taught for more than 20 years. Ifill graduated from Vassar College and earned her law degree from New York University School of Law in 1987. She was among the group of lawyers named to study the Supreme Court by Biden in 2021.

She’s a prolific author and writer, and in February of last year wrote an opinion column in The New York Times on how the legal profession must reckon with the fact that lawyers helped President Donald Trump by enabling him to effort “the most dangerous assault on American democracy in more than a century,” through his meritless lawsuits challenging the election, efforts to install a sympathetic attorney general who would help him, and by the growing movement in Congress to adopt Trump’s election lies.
___
HOLLY THOMAS 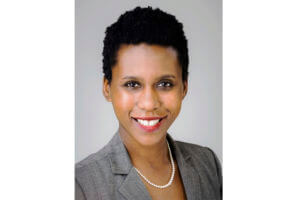 Holly Thomas, 43, was just confirmed to the largest federal appeals court last week, the San Francisco-based U.S. Court of Appeals for the 9th Circuit. She is the second Black woman ever to sit on the court.

Thomas is a graduate of Stanford University and Yale Law School. She had been in the Family Law Division of the Los Angeles Superior Court since 2018, and before that she was the deputy director of executive programs at the California Department of Fair Employment and Housing.

She has also worked at the NAACP Legal Defense and Education Fund, and was as an appellate attorney in the Justice Department’s Civil Rights Division.

She overcame a party-line vote deadlock in the Senate Judiciary Committee, requiring an additional floor vote to move her forward after Republicans questioned her ability to separate her prior advocacy for progressive issues from her work as a judge. During her time in the New York Solicitor General’s office, she filed briefs advocating for policies that allowed transgender people to use the bathrooms that correspond to their gender identity. At her confirmation hearings, she said she was more than able to set aside her work in order to fairly serve as a judge.
___
EUNICE LEE

Eunice Lee, 51, was named to the U.S. Court of Appeals for the 2nd Circuit in August, the first former federal defender to serve on the court. Her appointment was lauded as a recognition of the need to broaden the judiciary’s legal expertise, particularly because defense lawyers are not a common choice for such posts.
Lee graduated from Ohio State University and Yale Law School. She then clerked for U.S. District Court Judge Susan J. Dlott, and later for Judge Eric Clay on the U.S. Court of Appeals for the 6th Circuit. She spent time from 1998 to 2019 at the office of the appellate defender in New York City and also taught clinical law at New York University Law School.