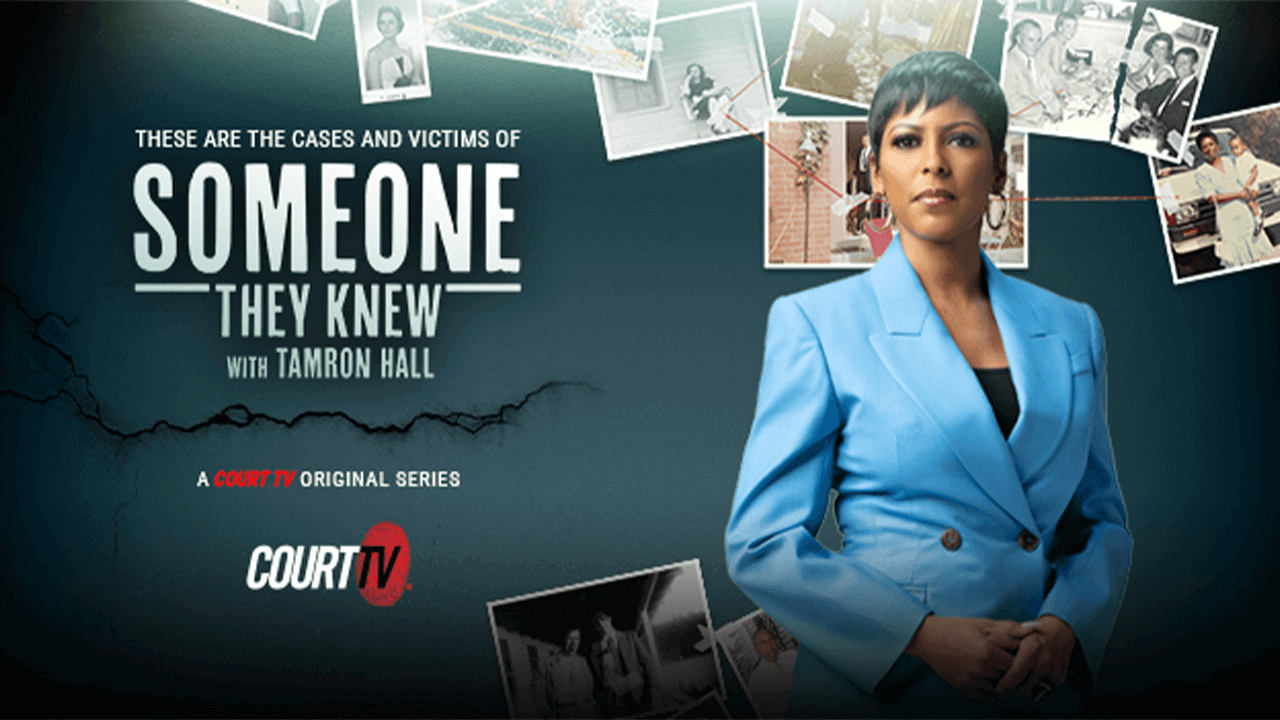 “Someone They Knew…With Tamron Hall” will be seen Sundays at 9 p.m. ET starting J Mar. 6, 2022.Each episode will follow the path from victim to verdict and will explore how when it comes to murder, it is rare for there to be no prior connection between the killer and the deceased. “Someone They Knew…With Tamron Hall” will dissect all the elements, starting from when the two first crossed paths to the moment a jury must decide what really happened.

No voice-overs, no reporters, and no correspondents, the “Someone They Knew…With Tamron Hall” stories are told from the point of view of the people impacted by the case, including the lawyers, jurors, members of law enforcement and the victim’s family and friends. Utilizing new interviews, archival footage and re-creations of the crime, the goal of each episode is an unbiased 360-degree balanced story.

“We’re thrilled to have Tamron host “Someone They Knew,” says David Hudson, Head of Original Programming at Scripps. “With her many years of experience in journalism, TV hosting, and personal connection to unsolved cases, we know she will hook the audience in with her captivating storytelling during each episode.”

“When the idea of a series focused on crimes committed by intimate partners was presented to me, I felt a deep connection to these victims,” says Tamron. “I have always been pulled into the ‘why’ – why crimes like this happen – and the heartbreaking impact they have on family and friends.  Court TV represents an additional, trusted partner to support the important work that I do.”

Most recently Tamron released her first crime novel As The Wicked Watch – ​​the first in a thrilling new series that follows a reporter as she unravels the disturbing mystery around the deaths of two Black girls; the work of a serial killer terrorizing Chicago.

Tamron Hall is an Emmy Award-winning TV host, journalist, author and philanthropist. She is the host and executive producer of the Emmy nominated daytime television show “Tamron Hall,” which is produced and distributed in national syndication by Walt Disney Television. For her work on the show’s first season, Tamron won the Daytime Emmy for Outstanding Informative Talk Show Host. “Tamron Hall” was also awarded the prestigious Gracie Award in its first season, which recognizes exemplary programming created by women. In October 2021 Tamron released her first novel, As The Wicked Watch – ​​the first in a thrilling new crime series.

Previously, Tamron hosted “Deadline: Crime with Tamron Hall” on Investigation Discovery, taking an in-depth look at crimes that shocked the nation. Tamron was the first African American female co-host of “TODAY” and served as the anchor for “MSNBC Live with Tamron Hall.” She received the 2015 Edward R. Murrow Award for her “TODAY” segment on domestic violence.

Court TV is available on cable, over-the-air and over-the-top. Court TV is also live streamed on CourtTV.com, YouTube TV, Pluto TV, SiriusXM, as well as the Court TV app for Roku®, Apple TV, Amazon Fire TV and Android and Apple devices. All feature robust and exclusive content from the massive Court TV library, including the nation’s most compelling, high-profile cases over the past 30 years available on demand. Court TV is part of The E.W. Scripps Company (NASDAQ: SSP).