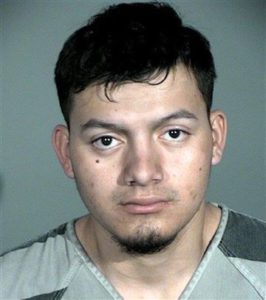 RENO, Nev. (AP) — Lawyers for a 21-year-old Salvadoran immigrant accused of killing four northern Nevada residents last year are asking the state Supreme Court to again overturn a judge’s ruling allowing him to be tried in Reno for crimes that occurred in another county.

The high court agreed with them, in part, and ordered Washoe District Judge Connie Steinheimer to revisit the matter in March. But she ruled again last month that prosecutors had sufficiently connected the crimes to try Martinez-Guzman in one location.

Martinez-Guzman faces the possibility of the death penalty if convicted of the killing of an elderly Reno couple and two Gardnerville women in their homes during what authorities say was a 10-day rampage in two counties in January 2019.

“They are temporally and spatially distinct; they do not constitute a continuing offense,” the defense lawyers wrote in asking the high court to again order Steinheimer to invalidate the Washoe County grand jury indictment regarding the crimes outside the county.

The trial originally was scheduled to begin in April but Steinheimer vacated the date and has scheduled a hearing Oct. 23 on a defense motion to suspend it indefinitely.

The defense lawyers have said they need to go to Martinez-Guzman’s home country of El Salvador – where travel currently is prohibited due to COVID-19 – to gather information to help determine if their client has an intellectual disability that would make it illegal to execute him.

Federal officials have said Martinez-Guzman is in the U.S. illegally, but they don’t know how or when he arrived in the U.S. The case has drawn the attention of President Donald Trump, who used it to bolster to bolster his argument for a border wall.

Prosecutors have said Martinez-Guzman stole a revolver from Gerald and Sharon David in Reno Jan. 4, 2019. He fatally shot Constance Koontz on Jan. 9, killed Sophia Renken on Jan. 12 and robbed and killed the Davids on Jan. 15, authorities have said. The crimes are linked partly because the same gun was used in all of the killings, they added.

Washoe County Deputy District Attorney Marilee Cate told the justices in November 2019 that the intent for the Douglas County killings was formed in Washoe County.

“The facts of this case are so intertwined that his possession of the firearm was an act requisite to consummation of the crimes in Douglas County,” Douglas County District Attorney Mark Jackson said.

“There was no evidence presented to the grand jury that he specifically sought to obtain a revolver or that at the time he took the revolver (and other property) he planned to keep or even use it. The revolver’s later use in Douglas County is not a jurisdictionally significant act for purposes of placing venue for the Douglas County charges” in Washoe County, they wrote.

The defense lawyers added: “The completed act of taking property (including the revolver) in Washoe County should not be used to `bootstrap’ venue of the Douglas County charges” into Washoe County court.