UPDATED 1/29/20: A jury found Donald Hartung guilty of three counts of first-degree murder. He now faces the death penalty for the 2015 murders of his mother, Voncile Smith, and two half-brothers, John and Richard Smith. The penalty phase of Hartung’s trial will begin Monday, February 3.

A Florida man dubbed the ‘Blue Moon Killer‘ is facing the death penalty in the 2015 murders of his mother and two younger brothers.

63-year-old Donald Wayne Hartung is accused of murdering 77-year-old Voncile Smith, 47-year-old John Smith and 49-year-old Richard Smith in what was once believed to be a ritualistic killing. Hartung allegedly stabbed each victim in their throat, struck them with a hammer and buried them under piles of clothes on July 28, 2015. Their bodies were found three days later inside the home the three victims shared.

When authorities initially contacted Hartung, he reportedly did not deny he saw the victims the evening they were killed. He said Tuesdays were a routine dinner visit with his mother and brothers. Neighbors told authorities it was normal to see Hartung at the home on Tuesdays, however this time he drove away late at night with no headlights. 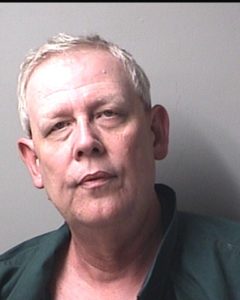 On July 31, authorities conducted a search of Hartung’s home and found puzzling evidence. They reportedly discovered clothes Hartung was wearing during the alleged crime, the possible murder weapons and a Wiccan/Pagan “worship room.” Because of the leaked evidence and the July 31 Blue Moon, news outlets dubbed Hartung the ‘Blue Moon Killer.’

However, further investigation reportedly revealed the killings may have been financially motivated. A co-worker of Hartung told police the defendant stated he would inherit his mother’s assets because he was the eldest living heir, according to investigators. An estate attorney for Voncile Smith reportedly confirmed Hartung was not in his mother’s will, but he would receive everything because there were no other surviving family members.

Hartung was arrested Oct. 27, 2015. He’s facing three counts of first-degree premeditated murder with a weapon. If convicted, he could potentially be sentenced to death.