Judge Nathaniel Gorton is slated to hand down the decision against Mark Riddell in Boston federal court on Friday. 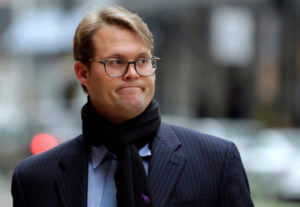 The Harvard graduate, who emerged as a key figure in the wide-ranging scandal, admitted to secretly taking the ACT and SAT in place of students, or correcting their answers, as part of a nationwide college admissions cheating scheme which has ensnared celebrities, business executives and athletic coaches at sought-after schools such as Stanford and Yale.

Riddell, who had been cooperating with federal authorities in hopes of getting a lesser sentence, pleaded guilty to fraud and money laundering conspiracy charges in April 2019.

U.S. Attorney for Massachusetts Rachael Rollins’ office, in a filing ahead of Friday’s hearing, asked the judge to sentence Riddell to four months in prison, followed by two years of supervised release and a previously-ordered forfeiture judgment of nearly $240,000. It noted other operatives in the scheme have received sentences ranging from probation to seven months in prison.

“Riddell’s crime was extensive and calls for a meaningful sentence of incarceration,” prosecutors argued. “He had a privileged upbringing and attended an Ivy League university before becoming a professional tennis player. He did not act out of desperation; he committed his offense because he could get away with it.”

Riddell’s lawyers, in their own sentencing memo, argued for one to two months in prison, saying he was neither the ringleader of the scheme nor a university insider, like the coaches and college administrators implicated. They also noted he’s paid nearly $166,000 toward the forfeiture obligation.

“Defendant Mark Riddell comes before this Court humbled, repentant, and ashamed,” the partly redacted memo opens. “Mark deeply regrets the ways in which his weakness, fraudulent conduct, and failure to resist the allure of easy money (…) undermined the integrity of the college admissions process.”

Riddell oversaw college entrance exam preparation at IMG Academy, a school in Bradenton, Florida that bills itself as the world’s largest sports academy.

Authorities say the admissions consultant at the center of the scheme, Rick Singer, bribed test administrators to allow Riddell to pretend to proctor the exams for students so he could cheat on the tests. Singer typically paid Riddell $10,000 per test to rig the scores, prosecutors said.

Riddell, who was fired from IMG Academy, made more than $200,000 by cheating on over 25 exams, prosecutors said.

Since March 2019, a parade of wealthy parents have pleaded guilty to paying big bucks to help get their kids into school with rigged test scores or bogus athletic credentials in a case prosecutors dubbed Operation Varsity Blues.

A Boston jury is also deliberating Friday on the fate of Jovan Vavic, a decorated former water polo coach at the University of Southern California. He’s the only coach of the many implicated to take his case to trial.