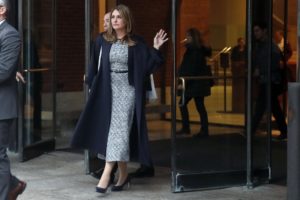 Michelle Janavs leaves federal court, Tuesday, Feb. 25, 2020, in Boston, after being sentenced to five months in prison for trying to cheat and bribe her daughters’ way into college as part of a nationwide college cheating scam. (AP Photo/Elise Amendola)

BOSTON (AP) — A year after dozens of prominent parents and athletic coaches at top universities were arrested in a college admissions cheating scheme, some are heading to prison while others are gearing up to fight the charges at trial in Boston. More than 50 people have been charged in the case, which has put a spotlight on the cut-throat admissions process and the lengths some wealthy parents will go to get their kids into the nation’s most prestigious schools.

Here’s a look at where the case stands:

Eight parents are scheduled to go on trial in October. They include “Full House” star Lori Loughlin and her fashion designer husband, Mossimo Giannulli, who are accused of paying $500,000 to get their daughters into the University of Southern California as fake crew recruits. The famous couple says they are innocent and their payments were legitimate donations. Another seven parents will go on trial in January.

Four coaches are still fighting the allegations. Among them are longtime tennis coach Gordon Ernst, who’s accused of getting $2.7 million in bribes to designate at least 12 applicants as recruits to Georgetown. USC’s former senior associate athletic director, Donna Heinel, and water polo coach, Jovan Vavic, are also challenging allegations against them.

Twenty one parents have admitted to paying bribes to have someone cheat on their children’s entrance exams or pretend their kids were star athletes for sports they didn’t play. They include “Desperate Housewives” actress Felicity Huffman, who paid $15,000 to have a proctor correct her daughter’s SAT exam answers. Huffman served a two-week prison sentence in October.

Five coaches have pleaded guilty. Among them is former Yale women’s soccer coach Rudy Meredith, who helped investigators unravel the wider bribery scheme by leading them to the admitted mastermind, admissions consultant Rick Singer. Singer has pleaded guilty to racketeering conspiracy and several other charges and has not yet been sentenced.

Several defendants have been cooperating with authorities and agreed to spill information about others charged in the case in the hopes of getting a lighter sentence.

Singer flipped and started working with investigators since September 2018 and secretly recorded his conversations with parents and coaches. He’s expected to be the government’s star witness at the trials. Also cooperating is Laura Janke, the former University of Southern California assistant women’s soccer coach who Singer paid to create fake athletic profiles for applicants. Former Florida prep school administrator, Mark Riddell, who admitted to taking the entrance exams in place of the students, or correcting their answers, also cooperated with the government’s investigation and could be asked to testify at trials.

Sentences for parents who’ve pleaded guilty range from no prison time to nine months behind bars.

Peter Jan Sartorio, who founded a California frozen foods company, was sentenced in October to one year of probation for paying to have his daughter’s ACT answers fixed. Sartorio, who was the first parent to agree to plead guilty, was also ordered to pay a $9,500 fine.

The harshest sentence handed down so far went to Douglas Hodge, former CEO of the Pacific Investment Management Co. He admitted to paying bribes totaling $850,000 to get four of his children into the USC and Georgetown as fake athletic recruits.

Vandemoer, who pleaded guilty the same day the charges were announced last March, avoided prison after admitting to agreeing to help students get into Stanford as recruited athletes in exchange for money for his sailing program. Center was sentenced to six months in prison for taking a $100,000 bribe to help an applicant get into the school as a tennis recruit.