NAGS HEAD, N.C. (WTKR) — This week, two North Carolina parents were arrested decades after a baby’s remains were found near a trash in the Outer Banks.

To solve it, Nags Head Police Chief Phil Webster said, “We went back to sort of the beginning.”

On April 4, 1991, a town sanitation worker found a baby boy’s remains in a trash can rack on East Tides Drive.

After decades of chasing leads, investigators chose to send a rib bone from the remains to Othram, a private genetic testing lab based in Texas. 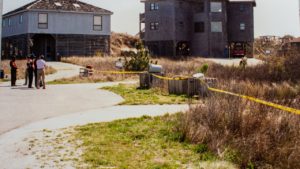 This file image provided by WTKR shows authorities at the scene where a baby boy’s remains were found on April 4, 1991, in Nags Head, North Carolina. (WTKR)

“It’s scary to be the custodian of what might be the last of the evidence, but it’s always rewarding in the end to give them an answer,” Othram CEO David Mittelman said in an exclusive interview with WTKR.

“We take this evidence that’s, for one reason or another, been un-trackable and unusable, and we pull useful information from that crime scene DNA evidence that can be used to identify a suspect or a victim in a crime,” Mittelman said.

Othram was able to pull DNA from the rib bone to conduct a genealogical profile leading to a North Carolina family.

“We use a process called forensic grade genome sequencing,” Mittelman said. “We then take that DNA that is prepared, and we put it through a process in which we can read out a bunch of DNA letters. With enough of these markers, we can look for people that share lots of markers in common with the unknown, and that becomes a match to a distant relative.”

“We can look for people, for example, in public databases that have consented or agreed to participate in these kinds of investigations to help people close out a cold case or identify, like in this case, someone who has never been identified,” Mittelman added. “By providing a little bit of information, it was able to take them to a family group and investigators were able to do their work, talk to people, figure things out and later on, use their own tools to confirm the work we did and establish confirmatory evidence that the people they identified were in fact the parents of this child.”

Those parents, Scott Poole and Robin Byrum, arrested last week by Alexander County, N.C., authorities. Both have been charged with concealing the birth of a child. Authorities said additional charges may come depending on the investigation.

Police told WTKR both were living in the area at the time, and it’s believed the boy was dead for about two months before being placed near the trash.

“It’s extremely rewarding to know that we can help close the loop on an investigation that runs decades,” Mittelman said. 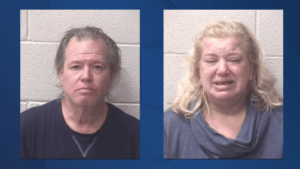 Chief Webster said the original cause of death was blunt force trauma and asphyxiation. The circumstances leading up to the infant’s death, however, remain under investigation.

As this investigation continues, both Mittelman and Webster believe Othram’s type of testing will become more mainstream.

All with the goal of cold cases getting quicker results.

“There is a huge backlog,” Mittelman said. “A silent mass disaster of cases that just cannot get solved using traditional methods. It’s our hope Othram will bring answers to as many of those cases as possible.”

This story was originally published Oct. 26, 2021, by WTKR in Norfolk, an E.W. Scripps Company.