PIKE COUNTY, Ohio (Court TV) —The fate of George Wagner IV is in the hands of 12 jurors after lawyers argued their theories of the case Tuesday and the judge instructed the jury on the charges.

It’s been a long time coming – 13 weeks since the trial began with jury selection in a sweaty gymnasium in August in southern Ohio. Now, the Pike County courthouse in downtown Waverly is decorated with holiday lights and garland. Since then, the jury has viewed thousands of exhibits and heard from 50 state witnesses and 10 defense witnesses.

To cap it all off, the lawyers spent two days Monday and Tuesday summing up their conflicting theories of Wagner’s alleged involvement in the 2016 murders of his brother’s ex-girlfriend, Hanna Rhoden, and seven members of her family.

Prosecutors contend Wagner shared his family’s desire to carry out the nighttime shooting spree in four locations in rural Ohio. His brother, Jake Wagner, testified that George participated in the murders, but didn’t shoot anyone. Testifying in his defense, Wagner told the jury he knew nothing of the plan and did not accompany his father and brother on the massacre.

“George didn’t do this. He wasn’t there. It’s not in his nature,” defense lawyer John Parker told the jury. “He’s different from Jake and Angela and he got up here and told you so. What more can a man do?”

Parker tried to distance George from his mother and brother, Angela and Jake Wagner, who testified that George knew about the plot and participated in the murders. He tried to run away as a teen and move out of his parents’ home an adult, but “he didn’t have the fortitude to break away,” Parker said. “It doesn’t mean he didn’t want to get away.”

Parker accused the state of overreaching in prosecuting George and painting his alleged involvement with a “very broad brush.” Parker reminded the jury of long stretches in testimony when the focus was on the other Wagners and recalled the prosecution’s tendency to refer to the Wagner’s collectively – “they,” “them,” “you guys” – a source of frequent defense objections. a source of frequent defense objections. 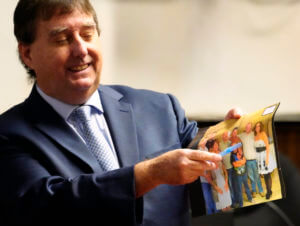 Defense attorney John P. Parker delivers his closing statement in the trial of George Wagner IV, Tuesday, Nov. 29, 2022 in Pike County Common Pleas Court in Waverly, Ohio. He showed the jury a photo from George and Tabitha Claytor’s wedding in 2012. In the photo, George has his arm around Frankie Rhoden, whom he considered a case friend. Also attending were Chris Rhoden Sr. and Chris Rhoden Jr. Eight members of the Rhoden family were found shot to death at four different locations on April 21-22, 2016. Wagner’s brother Jake Wagner and mom, Angela Wagner, have already pleaded guilty. George’s dad, George “Billy” Wagner III will go on trial in 2023. (Liz Dufour/Cincinnati Enquirer/POOL)

Waving a 77-page wiretap application from 2018 in front of the jury, Parker urged them to look through it for mentions of George, saying he wasn’t a suspect until he was interrogated at US border in Montana. “He wasn’t a suspect because he didn’t have a motive,” Parker said.

But the rest of his family did, Parker said. They suspected Jake’s ex-girlfriend, Hanna Rhoden, was letting their 2-year-old daughter Sophia be sexually abused – possibly, by members of her family, though they never proved it, Jake and Angela testified. George’s lawyer argued it was a different motive than the state’s custody theory. “Reason and experience teaches us people don’t kill each other because of custody.”

The defense lawyer said it was Jake, Angela and Billy Wagner, who set in motion the plan to kill Hanna Rhoden, her father, and other relatives who the Wagners believed would come after them. And they did it without George’s knowledge, Parker said.

The attorney urged the jury to view the evidence through George’s perspective as someone who believed law enforcement was trying to frame his family – especially when listening to surreptitious recordings of George railing against the investigation. “He didn’t know what his family did. Yeah, they are thieves; they have a weird lifestyle, no question about it. But that’s different from killing 8 people.”

The defense lawyer urged the jury to compare the victims’ cell phone records to Jake’s timeline of the murders, suggesting they didn’t match. Parker said the records show activity on the victims’ phones after the timeframe in which Jake said they were killed. Parker further argued the records suggest the victims were killed in the opposite order than the state and Jake claim they occurred in.

Parker also accused Jake of lying when he said someone other than him dragged the bodies of Chris and Gary Rhoden to another room of the house after Billy Wagner shot them. Parker said Jake was the only Wagner who could fit through the narrow hallway. Parker also blamed Jake for the presence of Gary’s blood in another part of the house Jake said he passed through, the marijuana grow room where Jake swiped security camera equipment to avoid detection.

If jurors decide to believe Jake, the defense lawyer urged them to remember what he said about his brother: “George tried to talk us out of it. George didn’t think it was a good idea. George only went along at the last minute. He only went along to protect me Jake from our crazy father. He didn’t have the intent to kill anyone. He went to protect me.”

Special prosecutor Andrew Wilson said the defense can’t have it both ways. 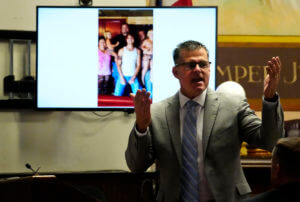 “The truth is either one or the other. You can’t argue both,” he said in the state’s rebuttal argument.

“Now look, there’s no evidence that he pulled the trigger, but you better believe he’s up to his eyeballs with his family,” Wilson said of George.

The prosecutor listed moments in the trial where the evidence suggested George was complicit in his family’s plot, from the purchase of a phone jammer on his credit card to signing forged custody documents. Complicity is what makes George just as guilty as the rest of his family on all 22 counts, Wilson said.

As “distasteful” as it may have been to offer plea deals to Angela and Jake, their testimony was necessary to eliminate other theories, the prosecutor said. Now, the defense can no longer argue the murders were connected to Gary and Chris Rhoden’s marijuana operation or the “dirty sheriff” now in prison, referring to former Pike County Sheriff Charlie Reader.

“All of those arguments were gone the moment Jake led us to guns,” Wilson said.

The prosecutor derided the defense argument that the motive wasn’t custody, but sexual abuse. Wilson said they were one in the same and they were both connected to the Wagner family’s bigger desire for “power and control” over the women and children in their lives, he said.

“They want you to mistake motive with justification. The way the Wagners justified these killings was to protect Sophia from being abused by the Rhodens. But let’s be honest — know why they never called child services or the doctor? Because it wasn’t true,” he said.

The Wagners made the same unsubstantiated allegations against Tabitha Claytor and Elizabeth Armer, the ex-wives of Jake and George, Wilson pointed out. “In the law, that’s called a common plan or scheme,” he said. “It worked with Tabby. It worked with Beth. But they weren’t as strong as Hanna.”

Gesturing toward the victims’ families in the gallery, Wilson said Hanna had the support of a family that would not let the Wagners take Sophia from Hanna in the same way they wrested Bulvine from Tabitha.

“Make no mistake about it, their desire to have Sophie and raise her 100% Wagner is why they did this,” the prosecutor said. “The Wagners need to control how their grandchildren are gonna be raised. That’s a group trait,” Wilson said.

Angela was the biggest “control freak,” but the secret recordings suggested George was just like her, Wilson said. George threatened to take Sophia away from Jake if Jake didn’t “protect” her from his then-wife, who Angela had accused of sexually abusing Sophia. George told his son Bulvine that border agents in Montana were bad people who wanted to kill his family.

“Do you think for a second the guy on those recordings would sit this out? He said ‘hell is coming and he’s bringing it,’” Wilson said.

“We can call it custody, protection, but it was always about control.” 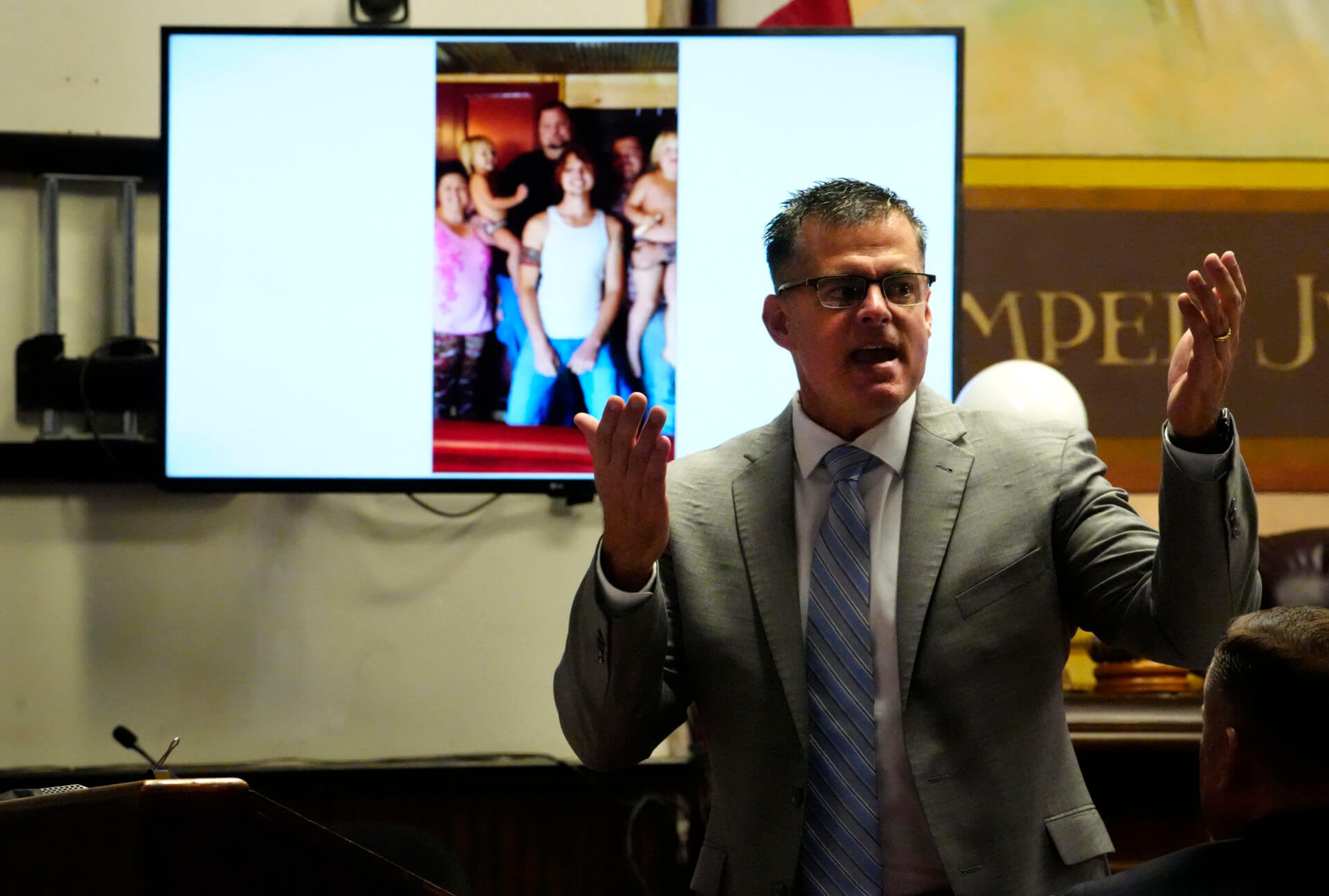