MINNEAPOLIS (AP) — The end of jury selection is in sight at the trial of a former Minneapolis police officer charged in George Floyd’s death, with just one more needed ahead of opening statements next week.

The process inched forward Monday with one juror seated and several others rejected. But only one more is needed to reach 15, the number of jurors Hennepin County Judge Peter Cahill said he wanted. Twelve will eventually deliberate, with two alternates; Cahill has said he will excuse the third extra juror when opening statements begin March 29 if the 14 others are still able to serve.

Derek Chauvin’s trial is being conducted amid the pandemic, with heightened risk for jurors to fall ill despite social distancing, mask-wearing and plastic shields in the courtroom. Selecting a jury has also been complicated by the worldwide attention to Floyd’s death, even before the city of Minneapolis announced a $27 million settlement to his family early in the process.

The only juror seated Monday is a white social worker in her 20s who said she has talked with her friends about police reform and that she thinks “there are things that should be changed.” But she also described police and their jobs as important, and said she is “always looking at every side of things.” 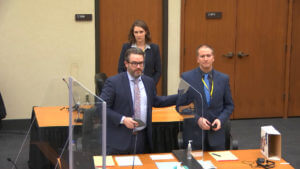 In this image taken from video, defense attorney Eric Nelson, left, defendant former Minneapolis police officer Derek Chauvin, right, and Nelson’s assistant Amy Voss, back, introduce themselves to jurors as Hennepin County Judge Peter Cahill presides over jury selection in the trial of Chauvin, Monday, March 22, 2021, at the Hennepin County Courthouse in Minneapolis. Chauvin is charged in the May 25, 2020, death of George Floyd. (Court TV)

On Friday, Cahill declined a defense request to delay or move Chauvin’s trial over concerns that the $27 million settlement for Floyd’s family had tainted the jury pool. He also ruled that the jury can hear evidence from Floyd’s 2019 arrest, but only information possibly pertaining to the cause of death.

Of the 14 jurors seated so far, eight are white, four are Black and two are multiracial, according to the court. Nine are women and five are men, and they range in age from their 20s to their 60s.

Several potential jurors were dismissed on Monday. One woman was excused because she has a chronically ill child at home. Another expressed concern about her English proficiency and ability to understand some technical terms. The defense used a peremptory strike to send home a nursing assistant who marched in a protest and carried a sign.

One man said in his questionnaire that he believed this was a case of excessive force, that the force caused Floyd’s death, and that police departments and other organizations work to cover up crimes. That man continued to say in court that he could be neutral, despite his strong opinions. Chauvin’s attorney, Eric Nelson, tried to have him dismissed for cause, but Cahill refused even though the judge found him to be “evasive” and “flippant.” Nelson used another peremptory strike to send that man home.

Another man was dismissed for cause after he said he was leaning toward finding Chauvin guilty. He compared the events surrounding Floyd’s death to a tussle with a brother, saying the wrestling should stop if someone says they give up.

“You wrestle, tussle or whatever, but there’s a line of where you have to stop when someone says no more,” he said.