INDIANAPOLIS (AP) — A former Indiana state senator was sentenced Wednesday to 10 months in prison for his role in a scheme that illegally funneled money from a casino company to his unsuccessful 2016 congressional campaign.

The federal investigation into contributions to Republican Brent Waltz’s campaign tied to a former casino executive led the Indiana Gaming Commission to force the company out of its lucrative ownership of projects for new casinos in Gary and Terre Haute. 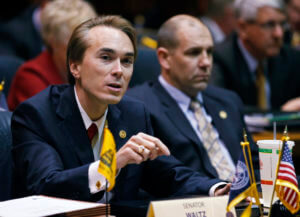 FILE – Then-Sen. Brent Waltz, R-Indianapolis, speaks during a joint committee hearing at the Statehouse in Indianapolis, Jan. 6, 2012. The former Indiana state senator was sentenced Wednesday, Aug. 17, 2022, to 10 months in prison for his role in a scheme that illegally funneled money from a casino company to his unsuccessful 2016 congressional campaign. (AP Photo/Michael Conroy, File)

Waltz, 48, of Greenwood, pleaded guilty in April to helping route about $40,000 in illegal contributions to his campaign and making false statements to the FBI.

Waltz said during Wednesday’s court hearing that his “greatest regret” was that his actions tarnished his reputation as a public servant, which included 12 years as a state senator representing the southern suburbs of Indianapolis, The Indianapolis Star reported.

Federal prosecutors had requested the 10-month sentence. U.S. District Judge James Sweeney, who also ordered Waltz to pay a fine of $40,500, could have sentenced him to up to five years in prison on each charge.

Keeler, a lawyer who was a Republican legislator for 16 years in the 1980s and 90s, pleaded guilty in April to filing a false tax return for claiming as a business expense $41,000 that the casino company paid to a political consultant who, prosecutors say, made the contributions through straw donors.

The September 2020 indictment of Keeler and Waltz led to Spectacle Entertainment being forced from ownership of Gary and Terre Haute casino projects now run by other companies.

The state gaming commission also raised financial misconduct allegations against Ratcliff, who agreed to give up his state casino license and exit the gambling industry. Ratcliff has not faced any criminal charges.

Federal prosecutors urged the judge to sentence Waltz and Keeler to at least 10 months in prison to discourage similar crimes by others. Prosecutors described both men as wealthy with successful careers.

“None of this was enough for either defendant,” prosecutors wrote in a court filing. “They wanted more, and they chose to commit crimes of opportunity — not economic necessity — to get what they wanted.”