SAN DIEGO (AP) — Kellen Winslow II — once the highest-paid tight end in the NFL — could face more than a decade in prison for multiple rapes and other sexual offenses against five women in Southern California, including one who was homeless when he attacked her in 2018.

Winslow will appear via videoconference at the hearing Wednesday in San Diego Superior Court. He has been in custody since 2019 and was expected to be sentenced in March 2020 but that hearing was postponed due to court closures amid the coronavirus pandemic.

The 37-year-old son of San Diego Chargers Hall of Fame receiver Kellen Winslow could face up to 14 years in prison under his latest plea deal.

Winslow in June of 2019 was convicted of raping a 58-year-old woman who was homeless in his home town of Encinitas, a beach community north of San Diego.

Jurors also convicted him of two misdemeanors — indecent exposure and a lewd act in public — involving two other women.

But that jury failed to agree on other charges, including the alleged 2018 rape of a 54-year-old hitchhiker, and the 2003 rape of an unconscious 17-year-old high school senior who went to a party with him when he was 19.

Winslow was going to be retried on six felonies including kidnapping, sodomy, forced oral copulation and two charges of rape in San Diego County Superior Court in November of 2019.

But he pleaded guilty moments before that trial was set to begin to raping the teen.

Under the same plea deal, the attack on the hitchhiker was reduced to sexual battery.

In exchange for his pleas, the court agreed to sentence him to between 12 and 18 years in prison for the rape and sexual battery charges and dismiss the others, sparing him the possibility of life in prison.

But his attorneys disputed whether the sentences for the crimes added up to 18 years. To avoid going back to court over the disagreement, both sides agreed last month to change the sexual battery plea to a plea of assaulting the hitchhiker with the intent to commit rape. That dropped the potential maximum sentence to 14 years. 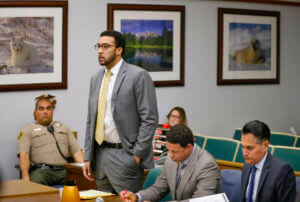 Defense attorneys had said the sex was consensual and attacked the credibility of the five women who took the stand at the June 2019 trial, saying there were inconsistencies in their stories.

They also said he suffers from traumatic brain injury from playing football and a motorcycle accident that ended his career.

Once a first-round NFL draft pick, Winslow played for the Cleveland Browns, Tampa Bay Buccaneers, New England Patriots and the New York Jets. He earned more than $40 million over 10 seasons in the NFL.

His father, a local legend, was in the courtroom throughout the trial.

After Winslow entered his guilty pleas in November of 2019, he reached an arm out to his father, who responded by touching his fist to his heart before his son left the courtroom.