Are you ready for the retrial? 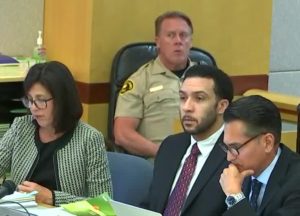 Famed NFL tight end Kellen Winslow II is back in a San Diego courtroom for the government’s second attempt at establishing that Winslow is, according to their theory, a sexual predator.

On May 13, 2019, Winslow’s first trial began with five accusers, twelve counts and a life in prison sentence on the line. Each accuser testified as a “Jane Doe” without revealing their names or faces. Court TV’s policy is to protect the identity of sex crimes victims.

These are the counts Winslow faced in his first trial:

Here is some background on each accuser from the first trial – most of whom will play a prominent role in Winslow’s retrial.

Testimony in the first trial lasted approximately eight days. The jury then deliberated nearly 23 hours over five days, before announcing on June 10, 2019, that it had reached verdicts on only four of the twelve counts:

The jury was deadlocked on the remaining eight counts and eventually, Judge Bowman declared a mistrial.

Onwards to the retrial where prosecutors insisted they would go forward with the remaining eight counts. However, the defense was successful in partially severing two of the counts – both involving the misdemeanor charges associated with Jane Doe #5. So, at this trial, there will only be six counts for the jury to consider involving Jane Doe’s 1, 2 and 4.

In the first trial, Jane Doe #3 testified – this time she will not. However, the jury will hear from Jane Doe #3 through the captivating body camera footage that was shown at the first trial. Her husband was also on that video and it was absolutely fascinating to see and hear them both moments after the crime occurred.

Also with respect to Jane Doe #3, according to Judge Blaine Bowman, the conviction for the Indecent Exposure will be entered into evidence; this is usually done through a certificate from the court. This is being allowed in to show Winslow’s propensity to commit sexual offenses, which is a major advantage for the prosecution.

Another advantage this go-around – the prosecution will be able to introduce into evidence Winslow’s conviction of Forcible Rape against Jane Doe #2 from the first trial.

In my opinion, as a former prosecutor and criminal defense attorney, that conviction, coupled with Jane Doe #2’s live testimony at this trial, will be an enormous boost to her accusation of Sodomy by Use of Force.

So, is it game over? Does the prosecution have the lead before testimony even begins?

According to Jury Consultant and frequent Court TV guest James McGarity, of R&D Strategic Solutions, “The fact that this is a retrial is a huge advantage to the prosecution because of the margin which favored the prosecution. The prosecution has less work to refine their case and got a mock trial out of the first trial.”

McGarity is referring to the jury split in the first trial which, according to our reporting, was as follows:

Court TV Lead Anchor and former prosecutor Vinnie Politan seems to agree who has the upper hand. “I always believe prosecutors have the advantage second time around. Before the first trial, defendants know the prosecution theory, but prosecutors don’t know what the defense will argue,” he says. “Now all the cards are on the table and prosecutors can adjust their arguments and case to deal with the defense theory right out of the box.”

As usual, Vinnie and I disagree.

When I was a defense attorney, I won retrials – even when the first trial’s jury split favored the prosecution. It just made me work harder, find more witnesses and refine the defense’s theory of innocence. My money is on the defense for a straight NG (Not Guilty) on the retrial.

Especially now that the defense has added an award-winning appellate lawyer, Patrick Ford, to the team of Marc X. Carlos and Gretchen Von Helms. This should presumably prevent objectionable evidence from coming into the trial. Ford will be a watchdog and, I believe, will shut down overly prejudicial testimony and evidence from being admitted.