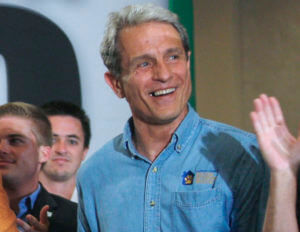 FILE – In this Sept. 22, 2010 file photo Ed Buck makes a campaign appearance for Meg Whitman, not shown, then a Republican candidate for governor of California, in Los Angeles. (AP Photo/Damian Dovarganes, File)

Buck, 65, has pleaded not guilty to distributing methamphetamine resulting in the deaths of Timothy Dean in January and Gemmel Moore in 2017.

Federal prosecutors say Buck preyed on vulnerable gay men and pressured them to let him inject them with drugs as part of a sexual ritual. Buck is also charged with providing meth to three more men, including one who overdosed.

Darden confirmed to the Los Angeles Times on Wednesday that he is representing Buck.

“I haven’t received any discovery yet, so that’s all I can say,” Darden said. Court records obtained by the newspaper show he replaced Buck’s deputy public defender, Claire Simonich, on Dec. 5.

Buck has been denied bail and is being held in a downtown Los Angeles jail. His trial has been delayed until August at the earliest, court records show. 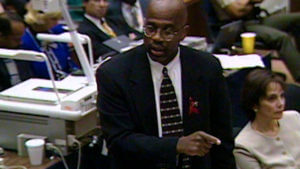 FILE: In this 1995 image, Christopher Darden gives his closing argument in the trial of CA v. OJ Simpson. (Court TV)

Buck ran unsuccessfully in 2007 for City Council in West Hollywood, which is known for its large LGBTQ community. He has donated at least $340,000 to Democratic campaigns and causes over many years.

Darden recently represented Eric Holder, the man charged with killing rapper Nipsey Hussle. He withdrew from the case in May, citing threats to him and his family.

In the 1990s, Darden was a member of the Los Angeles County District Attorney’s office, where he was a co-prosecutor in the O.J. Simpson murder trial.