WEST PALM BEACH, Fla. (WPTV) — The case against the Jupiter parents accused of locking their adopted son in an 8-foot by 8-foot box has been continued until Monday.

Timothy and Tracey Ferriter are charged with false imprisonment and aggravated child abuse following their arrest in February.

Authorities said the couple physically abused and forcibly confined their adopted 13-year-old to live within a garage structure.

During the investigation, detectives noticed the structure had a doorknob and a deadbolt, both locking from the outside, as well as a light switch also on the outside.

Detectives also found a camera, a mattress and a bucket inside the structure. 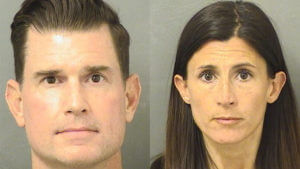 Judge Howard K. Coates Jr. was prepared to hear arguments from the defense regarding evidence in the case but decided Thursday to hold off on the hearing because the state attorney on the case is out sick with COVID-19.’

Thursday’s hearing lasted about 15 minutes before the judge continued the case until Monday.

The couple’s attorney claimed earlier this year that evidence was obtained illegally after her client’s email was hacked.

In a new seven-page filing, Ferriter’s attorney alleged her client’s and his wife’s personal Google account was hacked by one or more of their children.

“The false narrative created by this overzealous detective will be fully exposed at trial.  Had a credible investigation been conducted, Det. Sharp would know about the dangerous and escalating behaviors of this adolescent and the threat he posed to family and classmates.  He would know the young man had been diagnosed with Reactive Attachment Disorder, a circumstance tracing back to his adoption out of Vietnam. He would know the child came to the Ferriters having been fed a diet of sugar water, covered in scabies, and up to that point, lacking basic human contact, much less love.  He would know RAD is commonly diagnosed among children adopted from impoverished foreign countries. He would know there are many more families out there, like the Ferriters, who have been terrorized by the children they love, desperate to protect their families.”

This story was originally published June 9, 2022 by WPTV in West Palm Beach, an E.W. Scripps Company.