BOCA RATON, Fla. (WPTV) — A 23-year-old Boca Raton man is facing charges after, police say, he tried to strangle and drown his girlfriend following a heated argument on a boat.

The incident occurred on April 24 just before 9 p.m. on the waters of Lake Boca during Boca Bash. 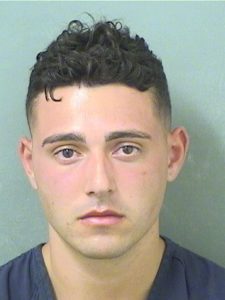 This April 25, 2022 booking photo provided by the Palm Beach County Sheriff’s Office shows Cole Preston Goldberg, who is charged with first-degree attempted murder after, police say, he tried to strangle and drown his girlfriend following a heated argument on a boat. (PBCSO)

According to a police report filed by Florida Fish and Wildlife Conservation Commission, Cole Goldberg, 23, was arguing with his girlfriend, Caroline Schwitzky, 32, when he began “grabbing her aggressively” to prevent her from getting away.

Bystanders say this went on for about 20 minutes until Schwitzky managed to jump off the boat to swim to another vessel. Goldberg jumped in after her and that’s when, witnesses say, he grabbed her by the throat with both hands and held her underwater.

After an investigation, authorities arrested Goldberg and took him to Palm Beach County Jail.

The couple had been dating for a year prior to the incident, according to police.

Goldberg has since been released from jail on $60,000 bond. He is charged with attempted first-degree murder and battery.

This story was originally published April 28 by WPTV in West Palm Beach, an E.W. Scripps Company.