NASHVILLE, Tenn. (WTVF) — The trial of former Metro Police Officer Andrew Delke was expected to begin July 12, but it won’t be happening now that Delke is expected to agree to a plea deal in the case.

NewsChannel 5 has learned that Delke is expected to plead guilty to voluntary manslaughter, which could carry a 3 to 6-year sentence. It’s possible that Delke could be eligible for parole before his sentence would be completed. 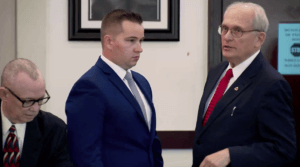 A plea settlement hearing, which will reveal the full details of the deal, will be held Friday morning at 9 a.m.

NewsChannel 5 Legal Analyst, Nick Leonardo, said the deal is a win for Delke.

Delke, who was previously decommissioned, submitted his letter of resignation from the department on Thursday.

Metro Police officer Andrew Delke was charged with first-degree murder in the death of Daniel Hambrick after Delke shot him during a foot chase back in 2018.

Hambrick’s mother, Vicky Hambrick, told NewsChannel 5 that the family was not consulted about the plea and they were very upset to hear the news.

“Our thoughts are with Daniel Hambrick’s family today, who have endured an unspeakable loss. We remain committed to policing reforms and violence prevention in our city.”

Three months ago, Metro City Council approved a $2.5 million settlement for Hambrick’s family. It was a record-breaking police misconduct settlement for the city of Nashville.

His death prompted protests and a renewed push for a Community Oversight Board and police body cameras, which were initially sparked by the death of Jocques Clemmons in 2017.

This story was originally published July 1, 2021, by WTVF in Nashville.