LOS ANGELES (AP) — A former lecturer at the University of California, Los Angeles, who was arrested Tuesday after police say he emailed an 800-page document and posted videos threatening violence against the school had previously sent messages saying he would “hunt” and kill a professor, court documents show.

Matthew Harris, 31, was taken into custody in Colorado following a standoff at his Boulder apartment complex that ended peacefully. 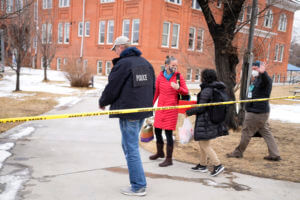 Police officer escorts people past a police line in front of University Hill Elementary School across from the campus of the University of Colorado after a man accused of making mass shooting threats against the college as well as the University of California, Los Angeles, was arrested Tuesday, Feb. 1, 2022, in Boulder, Colo. The police operation caused the evacuation of the elementary school and shelter-in-place orders for nearby residents on Boulder’s University Hill. (AP Photo/David Zalubowski)

The investigations in California and Colorado began Monday after Harris, who had lectured in the philosophy department at UCLA, sent the email to members of the UCLA community. UCLA officials canceled classes on campus Tuesday and the university’s police department tracked Harris to Boulder and reached out to law enforcement there.

University officials did not describe the email but the Los Angeles police chief said Harris was “potentially planning for a mass violence or shooting event at UCLA.”

Harris’ mother and the woman could not be reached for comment on Tuesday.

Harris is being held in Colorado on state charges and federal charges may be pursued. It wasn’t immediately known if Harris, a former postdoctoral fellow at UCLA, had a lawyer who could speak on his behalf.

UCLA classes will return to in-person teaching on Wednesday. Considered one of the top public universities in the country, UCLA is located in the affluent Westwood neighborhood of Los Angeles. The university has more than 31,000 undergraduate students and 14,000 graduate students.

Harris sent his former students an email on Sunday, just before 1 a.m., in a missive full of racist slurs against Jewish and East Asian people, according to the Los Angeles Times. The email included links to his manifesto and videos, the Times reported, including a video titled “UCLA PHILOSOPHY (MASS SHOOTING).” 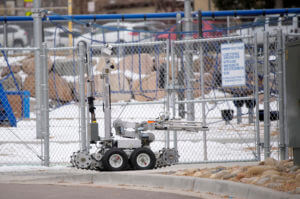 A bomb-detecting device sits near the playground behind University Hill Elementary School across from the campus of the University of Colorado after a man accused of making mass shooting threats against the college as well as the University of California, Los Angeles, was arrested Tuesday, Feb. 1, 2022, in Boulder, Colo. The police operation caused the evacuation of the elementary school and shelter-in-place orders for nearby residents on Boulder’s University Hill. (AP Photo/David Zalubowski)

Harris’ YouTube channel had more than 300 videos – including the UCLA philosophy one. Most were uploaded on Monday, but the account had been terminated by midnight, the newspaper reported.

Harris makes racist comments in several of the videos and cryptically names specific locations on the UCLA campus, noting that they’ve been added to his “list,” according to the Times.

The UCLA video included footage from the 2017 mass shooting at a Las Vegas music festival, the newspaper reported, as well as clips from “Zero Day” – a 2003 film that was loosely based on the Columbine High School mass shooting.

In January 2021, Harris emailed his mother. He said he planned to move closer to the Irvine campus so he could “hunt” down the woman and “put bullets in her skull,” court documents show. At times, he referenced previous shootings including Sandy Hook.

Harris’ mother reached out to the woman in April, saying she had received disturbing emails from her son that mentioned the woman by name. Harris’ mother had not seen her son in five years and believed he was in need of psychiatric help.

“I wouldn’t be able to live with myself if I did nothing and someone got hurt,” she wrote to the woman.

The University of California regents sought a workplace violence restraining order in May, the day after UCLA officials learned Harris had been released from a mental health facility and was back in Los Angeles.

A temporary restraining order was granted immediately, and a longer protective order – in place until 2024 – was approved less than a month later.

The woman was working at UC Irvine, which is part of the University of California system and about 50 miles (80.5 kilometers) south of UCLA.

Some students criticized UCLA on Monday for its response to the threats Harris allegedly sent this week, including releasing limited information to the school community.

The threats toward UCLA appear to be unrelated to bomb threats made Monday — one day before the start of Black History Month — to at least a half-dozen historically Black universities in five states and the District of Columbia, FBI Los Angeles spokesperson Laura Eimiller said.

Harris was taken into custody Tuesday morning after negotiators spoke to him by phone, Herold said. Authorities believe Harris had a connection in Boulder “but we’re just not sure of the magnitude of the relationships here at this time.”

“Upon reviewing parts of the manifesto, we identified thousands of references to violence, stating things such as killing, death, murder, shootings, bombs, schoolyard massacre in Boulder and phrases like ‘burn and attack Boulder outside of the university,'” Boulder Police Chief Maris Herold said at a news conference Tuesday.

Herold said police had contact with Harris in October, though no criminal charges were filed and authorities are reviewing their reports from that encounter.

Authorities said he attempted to buy a handgun in November but his purchase was denied. Officials believe the transaction did not go through because of a California-based protection order — likely the 2021 restraining order — that said he could not purchase or possess a firearm.

A records search by The Associated Press did not immediately show any criminal records. The records tie Harris to a Los Angeles apartment building in 2020, and listed previous addresses in North Carolina and New Jersey.

Harris began working at UCLA in the spring of 2019 as a postdoctoral fellow, according to a newsletter from the university’s philosophy department. His focus was on “philosophy of race, personal identity, and related issues in philosophy of mind.”

On bruinwalk.com, a website where UCLA students can post anonymous reviews of professors and other staff members, students gave Harris low ratings. In one review, a student who took the class in winter 2021 wrote that Harris is “extremely unprofessional.”

“I have no idea how this guy is still teaching,” another student wrote.

Harris completed his dissertation, “Continents in Cognition,” at Duke University in 2019, where he first met the woman who was the subject of the restraining order in 2013.

They had “minimal contact” but he reached out to her to discuss career advice in September 2020 because he had recently moved to Los Angeles, according to the court documents.

Despite initially being happy to meet with Harris, “their initial interaction left her feeling very uncomfortable and concerned about his behavior,” the court documents say.

Harris allegedly “began an aggressive campaign” of text messages and emails to the woman, leading her to fear for her safety. She told him to stop contacting her in March 2021 and later learned he’d made the death threats against her in the emails to his mother.

UCLA considered Harris’ threats to be credible, especially since he had been placed on “investigatory leave” the university on March 30, 2021. Those allegations ranged from “predatory behavior” to the dissemination of pornographic and violent content to students who did not have any relation to his class, court documents state.

The court documents say that UCLA’s police department and its Behavioral Intervention Team were aware of the threats and reached out to the FBI.

The Los Angeles Police Department’s mental evaluation unit had previous contact with Harris in the spring of 2021, but it was not clear what prompted the encounter or what may have come from it.

“The threats made yesterday were frightening for many of us and caused our community to feel vulnerable at an already challenging time,” said a statement Tuesday signed by Assistant Vice Chancellors Suzanne L. Seplow and Michael Deluca.

The UCLA campus was rocked by a shooting in 2016 when a former student killed his estranged wife in a Minneapolis suburb and traveled to UCLA, where he fatally shot an engineering professor who had been his mentor and then killed himself.
___
Slevin reported from Boulder, Colorado. Associated Press journalists Christopher Weber in Los Angeles and Thomas Peipert in Denver contributed.