DODGEVILLE, Wisc. (Court TV) – One fact is certain in the murder trial of Sean Pickett; The 21-year-old killed his mother and the family dog, a pit bull named “Chico.” This jury must decide whether he should be held responsible for causing their deaths.

After calling 911 to report his mother and dog were dead, Pickett first informed police that his mother’s boyfriend tied him up and killed them, framing him for the murders. He then admitted this was false. When police pressed him further, Pickett stated he blacked out and heard evil voices in his head telling him to kill his mom and Chico. He then admits he killed his mother and Chico. 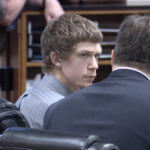 WHAT IS AN INSANITY DEFENSE?

Pickett initially pleaded not guilty by reason of mental disease or defect to the crimes of first-degree intentional homicide and mistreatment of animals, resulting in death. Sometimes referred to as an insanity defense, Wisconsin law states, “A person is not responsible for criminal conduct if at the time of such conduct as a result of mental disease or defect the person lacked substantial capacity either to appreciate the wrongfulness of his or her conduct or conform his or her conduct to the requirements of law.” Wisconsin Statute 971.15(1). Generally, if a person has a mental disease or defect which prevents them from knowing right from wrong at the time of the alleged crime, the person can be found not responsible for the alleged criminal conduct. However, the person can still then be committed for services and treatment.

In Wisconsin, self-defense means a person can intentionally use force against another to prevent or terminate “what the person reasonably believes to be an unlawful interference with his or her person” by the other person only if the actor “reasonably believes it is necessary to prevent or terminate the interference.” The actor may not intentionally use force intended or likely to cause death or great bodily harm “unless the actor reasonably believes that such force is necessary to prevent imminent death or great bodily harm to himself or herself.” Wisconsin Statute 939.48. If a defendant proves self-defense, the defendant is free as if acquitted.

WHICH DEFENSE DO YOU BELIEVE??

Pickett told police that “I was hearing evil voices. I was hearing evil voices. Cause I actually went unconscious. Just about a day or so ago…I woke up with evil inside. They said, they made [sic] me believe I was dead and did not think this was real. The evil in my head said I had to kill my mom and Chico in order to go to peace… In order to find rest. There were people inside my head saying that once I kill them, that I will go to rest.” Pickett then pleaded not guilty because of mental disease or defect.

Pickett initially pleaded not guilty by reason of insanity, but withdrew his plea before the trial began. During the opening statements, Pickett’s defense told the jury Pickett acted in self-defense. “Upon discovering his mother stabbing the dog, he confronted her, and she then turned on him, and he [Pickett] became the object of aggression. He acted in self-defense from this confrontation.”

WHAT DO YOU THINK? DO YOU BELIEVE PICKETT WAS INSANE OR ACTED IN SELF-DEFENSE BY PICKETT?