According to investigators, at around 6pm on May 7, 2019, the victim, 62-year-old Herring, was driving his Dodge pickup truck when he ran a red light and hit an 18-wheeler. Both vehicles were damaged and both drivers pulled over to wait for police to arrive. 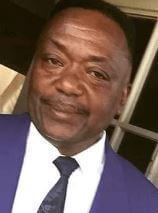 Herring’s accident was witnessed by two people who pulled over to help — the defendant, Hannah Payne, and an officer with the Georgia Department of Corrections by the name of Terry Robinson. Robinson, who worked in the infirmary at a local prison, examined Herring and noticed that he appeared disoriented.

A police officer reported that Herring’s eyes looked to be a reddish-orange color. He believed Herring was in diabetic shock.

Payne and Robinson stayed with both drivers for about 20 minutes waiting for the police to arrive when Herring got back in his truck and left the scene.

According to a defense motion, Robinson encouraged Payne to follow Herring after he left the scene so that she could get his license tag number. 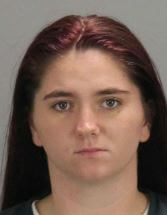 Payne, who was 21-years-old at the time, reportedly called 911 as she followed Herring to report the tag number. The dispatcher told her to return to the accident scene and not to follow Herring.

According to the defense motion, Payne was concerned that Herring might cause another accident, so she decided to continue following him until police could intervene to stop him.

Roughly one mile from the scene of the original accident, Payne pulled her Jeep Wrangler in front of Herring’s truck in order to stop him.  She got out of her Jeep and approached Herring’s truck. According to the defense motion, Herring revved his engine and attempted to run Payne over. 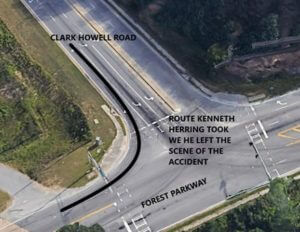 The scene of the initial hit and run at the intersection of Clark Howell and Forest Parkway in College Park, Georgia. No first responders arrived before Kenneth Herring left the scene.

The motion goes on to state that as Payne approached Herring’s truck, he grabbed her by the shirt and pulled her closer to his vehicle’s window. Payne told investigators that she then pulled out a semi-automatic 9mm that was holstered to her hip, a struggle for the gun ensued and the weapon discharged.

Clayton County Police, responding to a 911 call, reached Herring’s truck at 6:20pm. They found him sitting in the front seat suffering from a gunshot wound to the abdomen. They rushed him to an area hospital where he was pronounced dead less than an hour later. 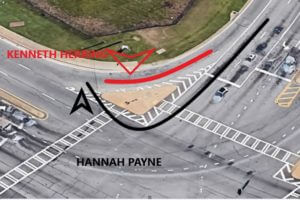 The site of the shooting, the intersection of Forest Parkway and Riverdale Road, about one mile west of the scene of the hit-and-run scene. This is the spot where Hannah Payne cut off Kenneth Herring, forcing him to stop.

According to prosecutors, Herring never got out of the truck; and his blood toxicology report showed no drugs or alcohol in his system. In an interview with Atlanta’s WXIA in 2019, Herring’s wife stated that she believes her husband was experiencing a diabetic episode and was trying to get to a hospital.

The State also says that a bystander took a video of the incident in which Payne can be seen hitting Herring with her left hand while holding the gun in her right. The footage reportedly shows the gun going inside the vehicle but it’s not possible to see who pulls the trigger.