SACRAMENTO, Calif. (AP) — A former California police officer who became known as the Golden State Killer told victims Friday he was “truly sorry” before he was sentenced to life imprisonment for a decade-long string of rapes and murders across a wide swath of California. 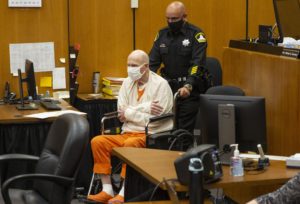 Joseph James DeAngelo is wheeled into the court during the third day of victim impact statements at the Gordon D. Schaber Sacramento County Courthouse on Thursday, Aug. 20, 2020, in Sacramento, Calif. DeAngelo, 74, a former police officer in California eluded capture for four decades before being identified as the Golden State Killer. DeAngelo pleaded guilty in June to 13 murders and 13 rape-related charges stemming from crimes in the 1970s and 1980s. (Santiago Mejia/San Francisco Chronicle via AP, Pool)

DeAngelo also publicly admitted dozens more sexual assaults for which the statute of limitations had expired.

SACRAMENTO, Calif. (AP) — A former police officer once sworn to protect the public faces multiple consecutive life prison sentences Friday after he was ultimately unmasked as the mysterious Golden State Killer who eluded his fellow investigators for four decades.

Joseph James DeAngelo, 74, will die in prison after he pleaded guilty in June to 13 murders and 13 rape-related charges stemming from crimes in the 1970s and 1980s under a plea deal that spares him the death penalty. He also publicly admitted to dozens more sexual assaults for which the statute of limitations had expired.

To finally identify and arrest him in 2018, investigators pioneered a new method of DNA tracing that involves building a family tree from publicly accessible genealogy websites to narrow the list of suspects. 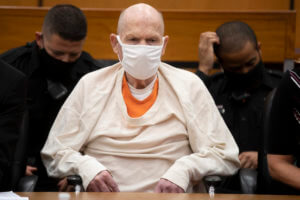 They linked nearly 40-year-old DNA from crime scenes to a distant relative, and eventually to a discarded tissue they surreptitiously sneaked from DeAngelo’s garbage can in suburban Sacramento.

The same technique has since been used to solve 93 murders and rapes across the nation, said Ron Harrington.

“It is probably the most important (recent) advancement by law enforcement in solving cold case murders and rapes,” he said.

His family has been obsessed with solving the 1980 slayings of youngest brother Keith Harrington and his new wife, Patrice Harrington.

It led oldest brother Bruce Harrington to champion Proposition 69, passed by California voters in 2004, that expanded the collection of DNA samples from prisoners and those arrested for felonies and has since led to more than 81,000 identifications.

The brothers were among family members and survivors who gave three days of often heartbreaking testimony before DeAngelo is formally sentenced Friday by Sacramento County Superior Court Judge Michael Bowman.

Most said they will never be the same, even as they told of their resilience and the bond they have formed since DeAngelo’s arrest.

The sweep of his crimes is measured by the mysterious stalker’s nicknames over the years, prosecutors said: the Visalia Ransacker, thought to be responsible for about 100 burglaries and one slaying in the San Joaquin Valley farm town; the East Area Rapist; the Original Night Stalker; and finally, the Golden State Killer when investigators linked the crimes that stretched across much of the state.

“He started off as a Peeping Tom, a voyeur, somebody lurking around women’s bedrooms at night peering in. He then became a two-bit burglar, breaking into women’s bedrooms, stealing trinkets and women’s underwear,” Ron Harrington recalled.

That escalated to raping single women, then to humiliating couples.

His technique became his trademark: He would force his victims at gunpoint to bind themselves with shoelaces, then balance plates on the man’s back with a warning that he would kill both victims if he heard the plates rattle while he raped the woman.

He killed three early Northern California victims when they interfered with his assaults on women. But he escalated again when he moved to Southern California, to 10 known murders.

Even DeAngelo’s ex-wife, Sacramento attorney Sharon Huddle, said in a court filing Thursday that she was fooled, though many victims have wondered aloud how she could not have known of her husband’s double life.

“I trusted the defendant when he told me he had to work, or was going pheasant hunting, or going to visit his parents hundreds of miles away,” Huddle wrote.

Many victims asked Bowman to make sure DeAngelo is sent to a remote prison and housed among other inmates instead of in protective custody, though state corrections officials said they will make the final decision on where and how he is housed.

“You are finally going to prison and will remain there until you die,” Jane Carson-Sandler, who was raped in 1976, told DeAngelo this week.

She recalled that he famously left behind a roast in the oven when police moved in to make their arrest on April 24, 2018. His survivors, she said, now plan to celebrate each anniversary of his arrest with a similar feast “in memory of your capture.” 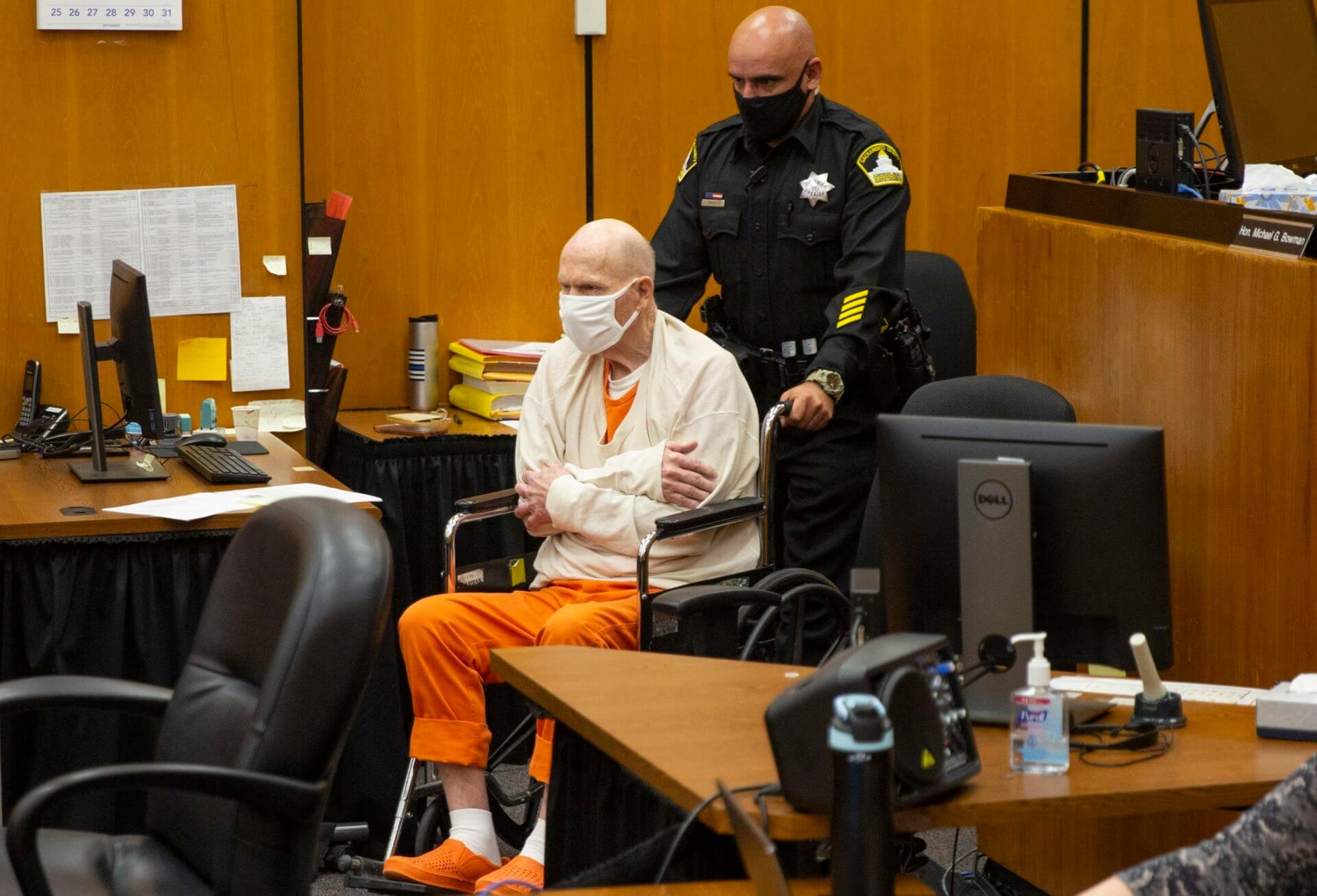 Joseph James DeAngelo is wheeled into the court during the third day of victim impact statements at the Gordon D. Schaber Sacramento County Courthouse on Thursday, Aug. 20, 2020, in Sacramento, Calif. DeAngelo, 74, a former police officer in California eluded capture for four decades before being identified as the Golden State Killer. DeAngelo pleaded guilty in June to 13 murders and 13 rape-related charges stemming from crimes in the 1970s and 1980s. (Santiago Mejia/San Francisco Chronicle via AP, Pool)
MORE NEWS