It’s been almost 19 months since I walked into the New York Criminal Court Building at 100 Centre Street. This time I was no longer ‘one of us.’ Now I was the dreaded ‘one of them.’ The press.

The same press causes security havoc and long lines and bellows questions in the halls to whoever the spotlight is on. They are now my people. 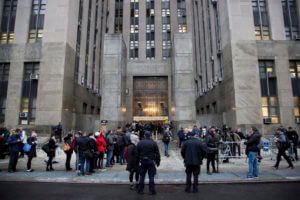 “They” make “our” job more difficult was the common complaint among my court officer friends. And like the rest of the media, I was here for the trial of this century – the trial of Hollywood film producer Harvey Weinstein.

Now I had to go back into that building, that building that was my home away from home for over fifteen years and break it to my friends that I was now ‘one of them.’

I suspected they knew and expected endless ribbing for the highly glossed not-a-hair-out-of-place Seema I’d become. My compliance to use multi-colored eyeshadow alone was bound to cause shock and dismay in the halls of the iconic criminal courthouse.

I made sure to cover my Diane Von Furstenberg wrap dress that my stylist sent over (shoot me, I have a stylist) with my The North Face puffy coat while my Swarovski necklace hid under the $5 coral pashmina I just purchased off a folding table on Canal Street.

I could not appear too fashionable if I wanted to save myself from the barrage of jokes sure to include terms like ‘Bollywood Anchor Barbie.’

Seema Iyer, Court TV Anchor, previously was a prosecutor in New York City before running her own criminal law practice in Manhattan where she represented the NYPD and handled constitutional law and civil rights cases.

Armed with my still-valid Attorney ID card I strode the same path from my old office on Broadway cutting down Franklin street; walking by Yuri’s – a combined shoe shine/hair salon. This is incredibly convenient because, it reminds me, my roots needed a refresh and my boot needed a new heel.

As I passed the family court on my right my stomach dropped like I was about to see my junior prom date at our 30-year high school reunion. I crossed the street – in the middle of the block with oncoming traffic like any other self-respecting New Yorker – then through muscle memory walked along the perimeter of 111 Centre Street, another courthouse, to face the North entrance of 100 Centre Street.

As my foot stepped from sidewalk to stair, I feel a surge mixed with a feeling of trepidation and joy. That feeling was definitely familiar – yet in the past, it was reserved for being on trial. Now I was simply one among thousands of journalists around the globe covering the latest high-profile trial.

I avoided pushing the heavy revolving gold-metal door and entered through the employee entrance. Friends immediately hugged and congratulated me; although some, like Eddie the court officer, a fixture at the magnetometers, was convinced I still worked in the building.

Good to know I was so missed.

I figured I’d go poke around the 15th floor where Harvey Weinstein was on trial. He was in the old Part 93 which has been renamed Part 99 – which was strange. Even when a new judge took over a courtroom the part number remained the same. 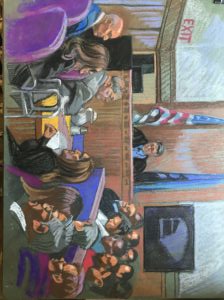 I knew the room well. It is majestic with high ceilings and poor acoustics that are still considered better acoustics than other courtrooms. I’ve lost and won many trials in that room when it was occupied by a now-retired judge who loved chiding me for being a talking head on cable news.

Court was already in session, with our legal correspondent Chanley Painter occupying Court TV’s sole designated spot. Each media organization was given only one seat because the courthouse has transformed into a madhouse with the former movie mogul on trial.

What happened to the days when even in the highest-profile of trials anyone could get a seat? When lawyers could dip in and out of testimony between calendar calls and jail visits?

Let me tell you.

The promise of Hollywood’s A-Listers like Charlize Theron, Salma Hayek, Rosie Perez, and Anabella Sciorra has created a constant state of frenzy both inside and outside of 100 Centre Street. Lawyers who have practiced in that building for more than three decades say they have never seen anything like it – the crowds, the sheer volume of press, and wrap-around lines to get a seat in the courtroom.

People wait in line as early as 4 am in hopes of seeing a disheveled Weinstein and his infamous walker face the possibility of life in prison. It is a constant circus in and around the courthouse.

So, I avoided that. For now.

I had 20 minutes before I had to be back to our Court TV studio which overlooked 100 Centre Street and I was going to use it productively. I grabbed a large black coffee at the newspaper stand by the South exit and then parked myself on a bench between arraignments and the clerk’s office for my absolute favorite of familiar sights – the perp walk. In this courthouse, a perpetrator or suspect is paraded through a public area until he or she is held in jail or sees a judge.

I watched as a suspect was being cradled between two cops and making that walk and he was actually smiling, as the officers were joking with him while being guided down the hallway.

I smiled in return, to myself.

Who says you can’t go home?