KENOSHA, Wis. (Court TV) – The same day Kyle Rittenhouse was acquitted of all charges in the deadly Kenosha shootings, his defense attorney, Mark Richards, was settling in for another long day of jury deliberations.

The Rittenhouse verdict paved the way for a passionate debate about guns, self-defense and justice. What the public was unaware of was the sequence of events taking place before the widely contended verdict was rendered.

The night before the verdict, Richards and his trial partner Corey Chirafisi speculated about a deadlocked jury. According to Richards, Chirafisi wondered if he could do a retrial. He had been away from his law practice for almost a month while they focused on the Rittenhouse trial. Both lawyers had other clients they needed to serve, but Richards was determined to see it through – he and Chirafisi would retry the case together if they had to.

Because of numerous death threats, the defense lawyers and Rittenhouse arrived at the courthouse with a bodyguard every day. They camped out in a room on the third floor during deliberations. The judge wanted them close by if the jury had a question, but with no word from the jury and their lunch orders in – Richards decided to keep a medical appointment he had rescheduled several times. The defense attorney told the judge’s assistant he would be out of the building, but would be back in an hour.

Earlier in the week, the judge suggested to a group of pool reporters that there would be about an hour notice before a verdict was announced – enough time to travel to Kenosha from Chicago, he mused from the bench.

On his way to the hospital – Richards received a call from the Judge’s Assistant, “she told us we had a verdict,” he said.  But the judge wanted him to keep his appointment. The next hour was excruciating for Richards.

“I was a wreck,” says Richards.

He held off telling Chirafisi and his client until he got through the hospital visit. Richards would have waited his turn, but this time he told the nurses he had to jump the line – he had received word there was a verdict.

“They knew before anyone else in the inner circle did,” he said. 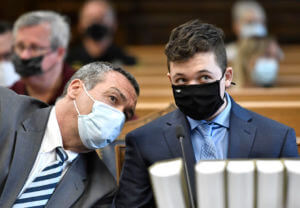 FILE – In this May 21, 2021 file photo, Kyle Rittenhouse, right, listens to his attorney, Mark Richards, during Rittenhouse’s pretrial hearing at the Kenosha County Courthouse in Kenosha, Wis. A judge is set to decide on several motions ahead of the trial for Rittenhouse who is accused of killing two men and wounding a third during a protest over police brutality in Wisconsin last summer. The judge’s decisions from Friday’s Sept. 17, 2021 hearing will set at least some of the ground rules for the November trial. (Sean Krajacic/The Kenosha News via AP, Pool File)

Richards called the court to tell the judge he was on his way back. By then, his phone was blowing up with questions about whether there was a verdict. Chirafisi and Rittenhouse were waiting for him in their war room. He confirmed what they suspected the jury had reached its verdicts.

At about 11:40 CT – an hour after Richards had gotten the call, the victims’ supporters came in from the hallway.  Susan Hughes, Anthony Huber’s great aunt, and his girlfriend came into the courtroom, and so did Kariann Swart, Joseph Rosenbaum’s fiancé.

There was still no official word from courthouse staff, however there were tell-tale signs. A growing number of deputies in bullet-proof vests began gathering in and outside the courtroom, and reporters were making inquiries to chase down the rumors racing through social media.

“It was very emotional,” Richards said as he tried to prepare his client for an outcome that potentially included spending the rest of his life in prison. He told the 18-year-old defendant ‘either you’re coming home with us or you’re going to jail.’

A guilty verdict on any of the five charges would mean Rittenhouse’s bond would be revoked and he would be remanded into custody. Richards believed his client’s notoriety would make him a target in prison, putting his life at risk.

Rittenhouse hugged his sisters, and his mother told them he loved them and said good-bye.

“I hope to bring him back,” he said to Rittenhouse’s mother.

As they entered the courtroom, Richards felt the weight of the world on his shoulders. He had grown to like his client. He wasn’t religious, but he said a prayer as he watched the jurors file in.

“Nobody was looking at us,” he recalled of the jury. 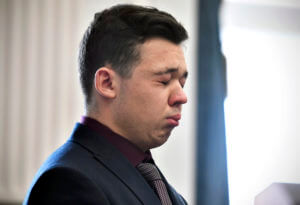 Kyle Rittenhouse closes his eyes and cries as he is found not guilty on all counts at the Kenosha County Courthouse in Kenosha, Wis., on Friday, Nov. 19, 2021. The jury came back with its verdict after close to 3 1/2 days of deliberation. (Sean Krajacic/The Kenosha News via AP, Pool)

Even after the first ‘not guilty’ was read, Richards braced himself for the possibility of a compromise verdict. Rittenhouse was visibly trembling and breathing hard. After the fifth and final acquittal, Rittenhouse’s knees buckled, and he fell to the floor. He needed the help of Attorney Natalie Wisco to get back into his seat.

Richards says he hopes to one day talk to the jurors, but for now they remain anonymous. Any personal details about them can only be disclosed with the written permission of Judge Bruce Schroeder.

Still, a closer look at the verdict forms reveals some unusual insight into their deliberations. While the defense team was speculating about a hung jury, jurors had already reached verdicts on three of the five counts.

The dates on their verdict forms shows that the panel of 7 women and 5 men had acquitted Rittenhouse on Wednesday of first degree intentional homicide for the shooting death of Anthony Huber and for recklessly endangering the safety of the unidentified male referred to as “Jump Kick Man.’

On Thursday, the jury acquitted Rittenhouse of attempted murder in the shooting and wounding of Gaige Grosskreutz.

The last two ‘not guilty’ verdicts related to the death of Joseph Rosenbaum and endangering the safety of journalist Richie McGinnis were signed on Friday. They would remain a secret until about 90 minutes later, when all five verdicts were read aloud in the courtroom.

For the latest news and trial updates on WI v. Rittenhouse, visit https://www.courttv.com/rittenhouse/