MINNEAPOLIS (AP) — Judge Peter Cahill told George Floyd’s family members that “I acknowledge and hear the pain that you’re feeling,” before sentencing a former Minneapolis police officer to 22 1/2 years in prison for murder.

Cahill didn’t speak at length during Derek Chauvin’s sentencing hearing Friday, but instead issued a 22-page memorandum explaining his rationale for the sentence. He said it was “not the appropriate time” to be “profound or clever.”

His sentence was 10 years above the presumptive penalty under state sentencing guidelines. Cahill told Chauvin that his penalty was “based on your abuse of a position of trust and authority and also the particular cruelty shown to George Floyd.”

Cahill said his ruling wasn’t based on “emotion or sympathy,” but he acknowledged the widespread pain that Floyd’s death has caused for the community.

“I acknowledge the pain not only of those in this courtroom, but the Floyd family who are outside this courtroom and other members of the community,” Cahill said. “It has been painful throughout Hennepin County, throughout the state of Minnesota, and even the country.” 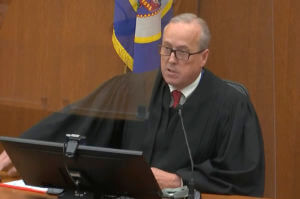 In this image taken from video, Hennepin County Judge Peter Cahill presides over the sentencing of former Minneapolis police Officer Derek Chauvin Friday, June 25, 2021, at the Hennepin County Courthouse in Minneapolis. Chauvin faces decades in prison for the May 2020 death of George Floyd. (Court TV via AP, Pool)

In his written legal analysis, Cahill noted he had previously found aggravating factors in the case that allowed him to sentence Chauvin above the guidelines. He wrote that two of those aggravating factors – Chauvin’s abuse of his position of trust or authority as a police officer and the fact that he treated Floyd with particular cruelty – were “substantial and compelling” reasons for a higher sentence.

“Part of the mission of the Minneapolis Police Department is to give citizens ‘voice and respect,'” Cahill wrote. “Here, Mr. Chauvin, rather than pursuing the MPD mission, treated Mr. Floyd without respect and denied him the dignity owed to all human beings and which he certainly would have extended to a friend or neighbor.”

Cahill said defense attorney Eric Nelson’s requests for probation, or alternatively for a sentence below what guidelines recommend, were not appropriate.

Cahill took issue with Nelson’s claim that no case law shows that a peace officer’s position has been used to trigger the aggravating factor or abuse of authority. Cahill said that’s not surprising, since prosecutions of officers, are rare and research hasn’t revealed any prior Minnesota cases in which a police officer was convicted of murder and prosecutors sought an upward sentencing departure.

“If anything the case for an enhancement is heightened, not reduced, when a defendant commits crimes while imbued with the authority of the State, as Mr. Chauvin did here,” Cahill wrote.

Cahill said the position Floyd was in and the drawn-out length of time Chauvin pinned him was particularly egregious, as Floyd begged for his life. He said these factors show Chauvin inflicted gratuitous pain and his “prolonged restraint of Mr. Floyd was also much longer and more painful than the typical scenario” of murder or manslaughter.