FREMONT COUNTY, Idaho (Court TV) — An Idaho judge has denied Chad Daybell’s request to sever his case from his wife’s.

A new trial date has not been set for the couple, who are facing charges for the deaths of Lori’s two children – 7-year-old Joshua “JJ” Vallow and 16-year-old Tylee Ryan – and Chad’s previous wife, Tammy Daybell.

They will be tried in Ada County, and have pleaded not guilty to all charges. 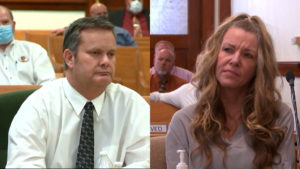 “In summary, the Court, fully apprised of the complexities and charges involved in this case,
nevertheless is persuaded that the joinder of trials remains appropriate. The charges
in the indictment include charges for conspiracy, which necessarily involves the agreement and participation of conspirators. The conspiracy charges result in a distinction that matters.

The court determines here that a joint trial of these cases will promote the administration of fairness for each if tried together, where it is clear that there will be substantial overlap in witnesses and in evidence presented relating to both defendants, in particular as it relates to the conspiracy charges.”

Prosecutors are seeking the death penalty against the couple.