NASHVILLE, Tenn. (WTVF) — The 1988 murder and rape convictions of both Joyce Watkins and the late Charlie Dunn have been vacated almost 34 years later, according to a court order issued by Judge Angelita Blackshear Dalton. 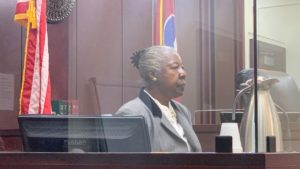 Joyce Watkins takes the stand on December 3, 2021. Watkins and the late Charlie Dunn were both charged and convicted of first-degree murder and aggravated rape of Watkins’ 4-year-old niece Brandi. The conviction was overturned due to lack of scientific evidence that the two committed the crimes they were convicted of. (Photo by: Levi Ismail/WTVF)

A court date is scheduled for Wednesday, January 12 at 9 a.m., when Judge Dalton will share her official ruling.

Watkins and Dunn were both charged and convicted of first-degree murder and aggravated rape of Watkins’ 4-year-old niece Brandi.

The two picked Brandi up from another family member’s home, where she had been staying for two months. Watkins says she brought the girl back to Nashville, and nine hours later, Brandi was unconscious. She noticed blood in Brandi’s underwear and signs of bruising.

Doctors found signs of rape and trauma, which attorneys found was enough to charge both Watkins and Dunn.

Watkins was released in 2015 after serving 27 years behind bars. The same year Dunn died of cancer while still in custody. Watkins has been on parole ever since.

According to the order by Judge Dalton, she found that “there was no compelling scientific evidence that Ms. Watkins and Mr. Dunn committed the crimes for which they were convicted.”

She goes on to add that “the medical opinion presented at trial on the timing of the relevant injuries was inaccurate.”

There she claimed the findings of former medical examiner Dr. Gretal Harlan “were not based on science.” Harlan was said to have estimated the time of injury by what she saw on the child’s skin, rather than using more trusted medical techniques.

Lewis also claimed there was no medical evidence that the injuries to the child occurred while she was in the care of Dunn and Watkins.

Judge Dalton went on to say the State failed to turn over exculpatory evidence, specifically the Department of Human Services report concerning the alleged destruction of evidence. “The State stipulates that it failed to disclose this report, which constitutes a Brady violation pursuant to Brady v. Maryland,” Dalton said.

“This office strives to do justice always. That includes recognizing wrongful convictions occur and to remedy them when possible. We can not give Joyce Watkins of Charlie Dunn time, but we can restore their names. Their innocence demands it.”

This story was originally published by Levi Ismail of WTVF in Nashville. WTVF is a part of Scripps Local Media.
MORE NEWS