CHICAGO (AP) — A popular actor steps out onto the street and is brutally reminded that, despite his fame and wealth, places still exist where the color of his skin and sexual orientation put him in danger. 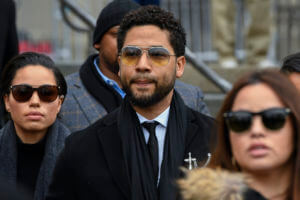 FILE – In this Feb. 24, 2020 file photo, former “Empire” actor Jussie Smollett leaves the Leighton Criminal Courthouse in Chicago. A judge on Friday, Oct. 15, 2021, denied a last-ditch effort to dismiss a criminal case against actor Jussie Smollett, who is accused of lying to police when he reported that two masked men attacked him in downtown Chicago. (AP Photo/Matt Marton, File)

That was the story that ricocheted around the world after Jussie Smollett, a Black and openly gay actor, reported to Chicago police that he was the victim of a hate crime.

Nearly three years later, Smollett is about to stand trial on charges that he staged the whole thing.

He was charged with felony disorderly conduct after law enforcement and prosecutors said he lied to police about what happened in the early morning hours of Jan. 29, 2019, in downtown Chicago. He has pleaded not guilty. Jury selection is scheduled to begin Monday. Disorderly conduct, a class 4 felony, carries a sentence of up to three years in prison but experts have said it is more likely that if Smollett is convicted he would be placed on probation and perhaps ordered to perform community service.

Smollett told police he was walking home from a Subway sandwich shop at 2 a.m. when two men he said recognized him from the TV show “Empire” began hurling racial and homophobic slurs at him. He said the men struck him, looped a makeshift noose around his neck and shouted, “This is MAGA country,” a reference to then-President Donald Trump’s campaign slogan, “Make America Great Again.”

Reaction to his reported assault underscored the increasingly polarized political landscape; Democratic politicians and others called it a shocking example of Trump-era bigotry and hate, while Republicans accused liberals of rushing to paint the president’s supporters as racists.

Just weeks later came the stunning announcement that Smollett was charged with staging the attack to further his career and secure a higher salary. And, police said, he hired two brothers from Nigeria, to pretend to attack him for $3,500.

This made the spotlight on Smollett shine even brighter, but this time he was vilified as someone willing to use one of the most potent symbol of racism in the U.S. to further his career.

“The most vile and despicable part of it, if it’s true, is the noose,” Judge John Fitzgerald Lyke Jr., who is Black, said during Smollett’s first court appearance. “That symbol conjures up such evil in this country’s history.”

Smollett also became a national punch line. He was the subject of a “Saturday Night Live” skit and a host of Black celebrities, from NBA analyst Charles Barkley to comedian Dave Chappelle, took turns poking fun at him. 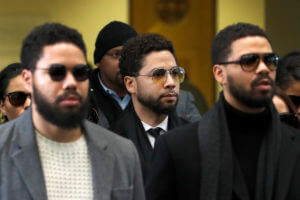 Actor Jussie Smollett, center, departs after an initial court appearance at the Leighton Criminal Courthouse, Monday, Feb. 24, 2020, in Chicago on a new set of charges alleging that he lied to police about being targeted in a racist and homophobic attack in downtown Chicago early last year. (AP Photo/Charles Rex Arbogast)

Then came the anger that Smollett’s fame accorded him influence that is out of reach for most. Reports indicated Cook County State’s Attorney Kim Foxx, at the request of former first lady Michelle Obama’s onetime chief of staff, communicated with a member of Smollett’s family early in the investigation. Foxx recused herself from the case then her office suddenly dropped the charges, and Foxx found herself at the center of a media firestorm as she refuted the suggestion that her office gave the television star a break.

All that set the stage for what turned a simple question of Smollett’s innocence or guilt into a convoluted legal saga that has dragged on for nearly three years.

Trial was delayed in part because of the COVID-19 pandemic, which brought cases around the country to a halt for months. But also, charges were filed, dropped and filed again by a special prosecutor who was brought in to take over the case.

Smollett — whose career has since faded — will this week return to the glare of the media spotlight, but this time as he passes the forest of news cameras as he makes his way to and from court.

The producers of “Empire,” on which he starred for four years, renewed his contract for the sixth and final season in 2019, but he never appeared in an episode. Nor has he released any music or given significant musical performances.

He has, however, directed an independent film, funded by his own production company, that is premiering at the American Black Film Festival this month. The movie, “B-Boy Blues” is an adaptation of a 1994 novel, the first in a series, about the lives of gay Black men in New York.

But once in court, what will unfold will be what may sound like a bad movie for the simple reason that a short movie is exactly what authorities have long maintained Smollett was trying to create.

Key witnesses will be the brothers, Abimbola and Olabinjo Osundairo, who say Smollett wrote them a check to stage the attack. They are expected to characterize Smollett as the star and director of an “attack” in full view of a surveillance camera that he mistakenly believed would record the whole event.

And, according to their lawyer, the brothers will also describe how Smollett drove them to the spot where the incident was to play out for a “dress rehearsal.”

“He was telling them ‘Here’s a camera, there’s a camera and here’s where you are going to run away,’” said their lawyer, Gloria Rodriguez.