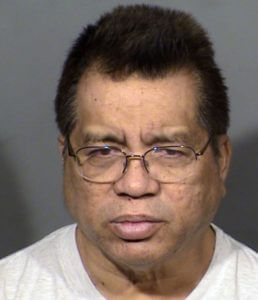 Alfredo Caracena was arrested on suspicion of two counts of lewdness with a child under the age of 14. (Clark County School District Police)

A teacher’s aide normally worked in Caracena’s classroom, but was not at work that day. According to the report, Caracena had a female student sit on his lap. He then began to touch her body and asked if she liked it, the report states.

The student told another teacher what happened, and that teacher reported it to the school’s principal. Caracena was sent home, the principal told police.

When police arrived at the school to investigate, Caracena had already put in his resignation. He had been employed with the Clark County School District since 2018, a spokesperson said previously.

He was arrested for two counts of lewdness with a child, and is due in court for a preliminary hearing on June 6.

This story was originally published April 22, 2022 by KTNV in Las Vegas, an E.W. Scripps Company.