UVALDE, Texas (AP) — A Uvalde police officer criticized over video of him checking his phone during the massacre at Robb Elementary School is the husband of a teacher who was killed in the classroom and had contacted him after after being shot, according to a Texas lawmaker investigating the shooting.

Texas state Rep. Joe Moody came to the defense of Ruben Ruiz after the officer was singled out by some users on social media as an example of the bewildering inaction by law enforcement during the May 24 attack.

Roughly 80 minutes of surveillance video published this week by the Austin American-Statesman showed Ruiz as one of the first officers to arrive in the hallway after the shooting began. He checks his phone moments before officers closer to the classroom run back down the hallway after shots are fired.

Moody tweeted Wednesday that the officer was the husband of Eva Mireles, one of two teachers killed along with 19 children in the fourth-grade classrooms. Moody is part of a Texas House committee that has spent weeks investigating the shooting and plans to release its findings Sunday. 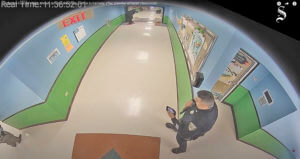 In this photo taken from surveillance video provided by the Uvalde Consolidated Independent School District via the Austin American-Statesman, shows officer Ruben Ruiz, whose wife, Eva Mireles was killed in the shooting, checking his phone in the hallway at Robb Elementary School in Uvalde, Texas, Tuesday, May 24, 2022. (Uvalde Consolidated Independent School District/Austin American-Statesman via AP)/

“I’d not planned to speak publicly until the report was released, but I couldn’t say nothing seeing this man, who’s lost everything, maligned as if he was indifferent or actively malicious. Context matters,” Moody tweeted.

The hallway video shows Ruiz quickly glancing at his phone around 11:36 a.m. while holding a position at the end of the hallway. Three minutes earlier, the gunman is seen walking down the hallway and entering the classroom.

Authorities have previously said that body camera footage later showed Ruiz at 11:48 a.m. entering the building through the west door and telling officers, “She is shot.”

“What happened to (Ruiz) is he tried to move forward into the hallway, he was detained and they took his gun away from him and they escorted him from the scene,” Texas Department of Public Safety Director Steve McCraw told lawmakers at a hearing on June 21.

McCraw has called it an “abject failure” that police ultimately waited more than an hour before confronting the gunman.

“We’ll have much to say about the police response, but no criticism of this officer,” Moody tweeted.