MADISON, Wis. (AP) — A man convicted of rape and murder when he was a teenager whose story was documented in the 2015 Netflix series “Making a Murderer” asked Wisconsin’s governor for a pardon or commutation of his life prison sentence on Wednesday. 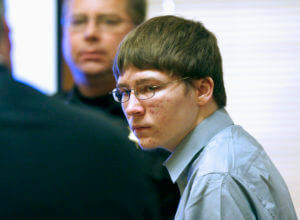 FILE – In this April 16, 2007, file photo, Brendan Dassey appears in court at the Manitowoc County Courthouse in Manitowoc, Wis. Dassey, the man convicted of rape and murder when he was a teenager whose story was documented in the 2015 Netflix series “Making a Murderer,” is asking Wisconsin’s governor for a pardon. Attorneys for Dassey said Wednesday, Oct. 2, 2019, that they are petitioning Democratic Gov. Tony Evers for either a pardon or a commutation of his life prison sentence. (Dan Powers/The Post-Crescent, Pool, File)

The request from Brendan Dassey came as his advocates launched yet another attempt to free him, this time outside the court system. His latest appeal was not considered by the U.S. Supreme Court.

Dassey’s chances of getting a pardon from Gov. Tony Evers appear remote. Evers’ rules for a pardon forbid anyone still serving their prison sentence from being considered and he’s also not issuing any commutations.

Dassey, now 29, was 16 years old when he confessed to Wisconsin authorities that he had joined his uncle, Steve Avery, in the 2005 rape and murder of photographer Teresa Halbach, before burning her body in a bonfire.

“I am writing to ask for a pardon because I am innocent and want to go home,” Dassey said in a handwritten note to Evers that accompanied his application. Dassey congratulated Evers, a Democrat who took office in January, on becoming governor. Dassey also listed things he enjoys including Pokemon and hamburgers and drew a pair of hearts with the word “hugs” in one and “love” in the other.

Evers re-started Wisconsin’s pardons board this year after his Republican predecessor Scott Walker stopped it, but to be considered the applicants must have completed their prison sentences. Anyone not meeting that criteria will be rejected as ineligible with no review, the application form says.

Evers has no public rules for commuting a prison sentence, but his spokeswoman Melissa Baldauff said in June that he is not considering doing that “at this time.” Commutations in Wisconsin are rare. No governor since Tommy Thompson, who left office in 2001, has issued one. 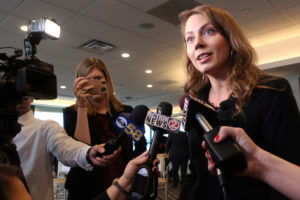 Laura Nirider, an attorney for convicted murderer Brendan Dassey whose story was told on the Netflix series “Making a Murderer,” describes his application for a pardon submitted to Wisconsin’s governor on Wednesday, Oct. 2, 2019, in Madison, Wis. Dassey is serving a life sentence for the 2005 murder, but Nirider and other advocates hope Gov. Tony Evers considers his pardon request. (AP Photo/Scott Bauer)

“What we’re hoping to do is to take this moment to ask the governor to hold off, to look at this case as a perfect example for that kind of relief,” she told reporters following a news conference. “We look forward to working with Governor Evers to help him understand this case, to help him see that it’s time to bring Brendan home.”

Evers’ spokeswoman Baldauff did not immediately return a message seeking comment. Evers has yet to act on any pardon requests.

The pardon request argues that Dassey was the victim of a “uniquely and profoundly flawed legal process.” It says seeking clemency from the governor is “one of the last remaining legal options” available.

“By his prison conduct and his gentle, patient insistence of his own innocence, Brendan has shown himself to be the rare person who is worthy of clemency,” the application said.

Dassey’s attorneys say he’s intellectually impaired and that he was manipulated by experienced police officers into accepting their story of how Halbach’s murder happened. They wanted his confession thrown out and a new trial.

Avery and Dassey are serving life sentences. The U.S. Supreme Court last year, without comment, said they would not consider Dassey’s appeal of his conviction. He could request another trial if a judge agrees he has new evidence that warrants it.

At Dassey’s trial, video of his confession to investigators played a central role. Authorities had no physical evidence tying Dassey to the crimes, and he testified that his confession was “made up,” but a jury convicted him anyway. He will be eligible for parole in 2048. 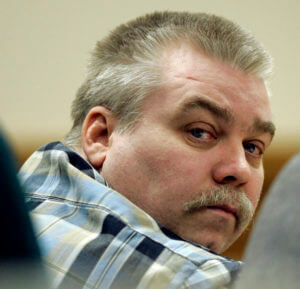 Dassey’s mother and cousin attended a news conference in Madison where the pardon application was announced. They did not speak to reporters.

Avery spent 18 years in prison for a different rape before DNA testing exonerated him. After his release, he filed a multimillion-dollar lawsuit over his conviction, but he was arrested in 2005 and later convicted of Halbach’s murder as that lawsuit was still pending. Avery maintains he was framed.