PARKERSBURG, W. Va. (Court TV) — Chester Lilly has been found guilty of first-degree murder in the death of his neighbor, Travis Peters. This was a bifurcated trial, with a mercy phase during which the jury decided not to grant the defendant mercy. In other words, they recommended he serve life in prison without the possibility of parole.

West Virginia is not a death penalty state. Instead, individuals found guilty of first degree murder receive life sentences. But per state law, the jury did have the opportunity to grant Lilly mercy. People who are granted mercy are eligible for parole after serving the first 15 years a life sentence.

The jury made their decision after hearing three witnesses for the defense and two for the state. Defense witnesses included the defendant’s mother, father and sister. The State called two witnesses. One was Detective Kyle Barnett, the lead detective in the case, who also testified about the prior convictions of the defendant including sexual assault in third degree of a 14-year-old and malicious assault. The second witness was Marcella Waldron, the mother of the victim.

An October 4 sentencing date has been set.

PARKERSBURG, W. Va. — A West Virginia man accused of fatally stabbing his neighbor is facing life in prison, if convicted by a jury.

Chester Lilly is accused of murdering 40-year-old Travis Peters in his yard on June 18, 2019. According to a criminal complaint, surveillance video shows Lilly leaving his porch and walking towards Peters’ home. “A short time later,” Lilly is shown returning to his porch, “carrying what appears to be a knife” with blood on his hand. He then allegedly leaves the scene. 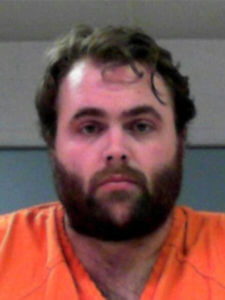 Another neighbor discovered Peters’ body 20 minutes later and called police. Parkersburg authorities say a “blood trail” led them to the victim’s body when they responded to the scene.

The next day, Lilly reportedly turned himself in, where officers observed minor cuts on his right forearm. DNA and fingernail scrapings were immediately collected from Lilly. He was arrested and charged with murder that day.

Opening statements began the afternoon of Monday July 26th, immediately after a jury of 10 white men and four white women — ranging in age from 30-60 — was seated.