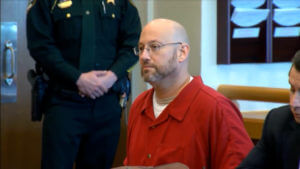 This January 3, 2020, image from video shows convicted murderer Mark Sievers during his sentencing. Sievers was sentenced to death for the brutal killing of his wife, Dr. Teresa Sievers. (Court TV)

Mark Sievers was sentenced to death in January 2020, a month after a jury found him guilty of first-degree murder and conspiracy to commit murder. Dr. Teresa Sievers was killed in the family’s Bonita Springs home on June 28, 2015. Her body, which sustained nearly 20 blunt force trauma blows, was found the next day. Two other men, Curtis Wright and Jimmy Rodgers, were also convicted in her death.

On Tuesday, the Supreme Court of Florida heard arguments in the death conviction of Sievers. Defense attorneys argued Curtis Wright’s testimony was problematic and prejudiced the jury.

They claim he gave conflicting information that doesn’t corroborate their client’s involvement in his wife’s death. The defense also argues Wright was motivated to lie because he was offered a plea deal to testify against Sievers, claiming Wright has a history of not telling the truth.

In rebuttal, the State disputed the defense’s stance, stating the jurors were informed of Wright’s previous misstatements and an offer of a plea deal. They asked the justices to affirm Siever’s conviction and sentence.

A written ruling is expected to be published within three weeks.