COLUMBIA, Mo. (AP) — A Missouri man who was convicted last year of killing his wife and burying her body will face another trial this year on charges that he abused the couple’s young daughter.

Joseph Elledge has pleaded not guilty to three felonies involving his daughter, who was 1-year-old when her mother was killed. 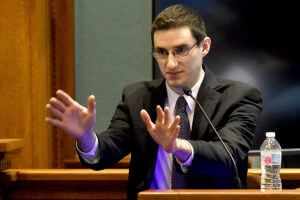 Defendant Joseph Elledge testifies how he pushed his wife Mengqi Ji, during a shoving match before she fell and hit her head in Oct. 2019 during his murder trial Wednesday, Nov. 10, 2021, in Columbia, Mo. Elledge was convicted of killing his 28-year-old wife, whom he reported missing in October 2019. Her remains were found in March in a park near Columbia, Mo. (Don Shrubshell/Columbia Daily Tribune via AP, Pool)

Elledge was convicted Nov. 11 of second-degree murder in the death of Mengqi Ji, a 28-year-old Chinese woman he married while they were studying at the University of Missouri. He was sentenced in January to 28 years in prison.

Elledge buried his wife’s body in a park near Columbia after she died in October 2019. Her body was not found until March 2021. Elledge has said Ji’s death was accidental.

The abuse charges were filed after a Columbia police investigation that started after Ji disappeared. Elledge was arrested Oct. 25, 2019 after police said they found iPad photos of his daughter’s bruised body, the Columbia Missourian reported.

He was charged with abuse or neglect of a child, endangering the welfare of a child and third-degree domestic assault.

During a hearing Monday, Boone County Circuit Judge Kevin Crane rejected a request by Elledge’s defense attorney, John O’Connor, that the trial be moved because of extensive media coverage of the murder trial. Jurors will be brought in from Warren County.

Crane said he would set a date for a four-day trial depending on attorneys’ schedules.