RICHMOND, Va. (WTVR) — “It’s been four years. Nobody has said anything,” Sharie Harris said about the 2018 murder of her son Tahjmere Hopkins. “I don’t understand how nobody saw nothing.”

Hopkins, 22, was found naked, with his hands and feet bound to a metal chair on the front porch of a home on St. Matthew Street in Petersburg.

“It was one of the most brutal murders that I’ve ever seen,” former Petersburg Police Chief Emanuel Chambliss said at the time. “He was beat. He was shot. He was tortured.”

Tahj was last seen alive on May 2, 2018, leaving the McKenzie Street home he shared with his girlfriend.

The next morning, Tahj’s body was found on the porch about two miles away.

Given the nature of the young man’s wounds, investigators and his mother believe Tahj knew his killer and the murder was personal.

Hopkins was shot four times in the head, according to the autopsy. His face was battered and bruised. He was bound and gagged.

“It appears that a message was trying to be sent,” Chambliss said in a 2018 interview. “Yes, he suffered.”

Court documents obtained in Chesterfield County revealed Tahj had an ongoing dispute with someone known to his family. That person is not charged in connection to Hopkins’ death.

“He just was evil,” Harris said about the man named in the court documents. “If I was to find out that he was the one who did something to my son. I won’t be surprised.” 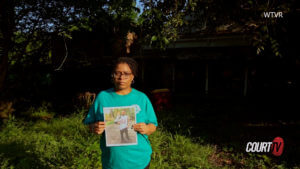 Harris is calling for police to take a closer look at her son’s murder. She believes information that could lead to an arrest is hidden somewhere on Facebook.

“Two days after he was murdered, his Facebook was shut down. It was deactivated,” she said. “[Police] said they can’t get into it.”

Travis Christian, who became Petersburg Chief of Police in 2020, said he has assigned another detective to the case and urged neighbors to come forward with information.

Christian has also instructed his detectives to re-examine all the evidence collected in this case.

That includes the metal chair to which Tahj Hopkins was tied.

The chair where his body was found. 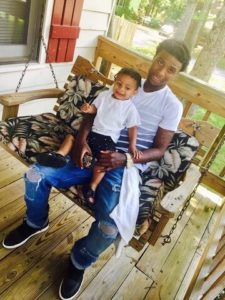 Tahj Hopkins with his son. (Provided to WTVR)

“I don’t understand,” Harris said. “I’m sure there’s evidence on that.”

“I’m not aware of all the evidence that was collected from the scene,” Chief Christian said when asked why the chair remained outside the home. “I do know that there was a lot of evidence taken.”

He said his investigators would go back and re-canvass the area not only for additional evidence but for people who may have seen something.

“How deep does this go? For people to be that scared. To me, it has to be deeper than that,” Harris said. “I just don’t feel like he has peace. It’s like this thing happened to him and it’s not solved. Somebody needs to start talking. It’s just sad that my grandson only got two years with his father. He was a good father.”

Re-examining unsolved murders, WTVR-TV Crime Insider Jon Burkett has partnered with the Reopen the Case Foundation to highlight cold cases in Virginia with the hope that someone will see the story and provide police with the information investigators need to make an arrest.

This story was originally published June 6 by WTVR in Richmond, Va., an E.W. Scripps Company.