HAMILTON, Ohio (AP) — An Ohio woman accused of trying to abandon her 6-year-old son at a park, dragging him as she drove away and later dumping his body in the Ohio River was indicted Friday on charges including murder and corpse abuse. 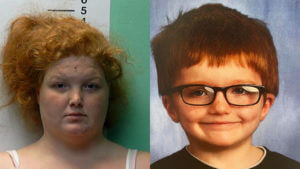 The 16 counts against Brittany Gosney, of Middletown, also include involuntary manslaughter and multiple counts of endangering children, abduction and kidnapping. The reasons for those charges weren’t explained in further detail in the indictment.

Authorities have said she told investigators that her son, James Hutchinson, was killed at a park in southern Preble County when he grabbed for a vehicle door and was dragged as she drove away.

Police believe Gosney and her boyfriend, James Hamilton, later dumped the body into the river near Lawrenceburg, Indiana, last weekend. Flood conditions this week have held up the search for the boy’s body.

Hamilton, 42, was also indicted Friday on 15 counts, including corpse abuse, tampering with evidence, endangering children, kidnapping and abduction. No attorney was listed for him in online court records.

Authorities say two other children who lived in the Middletown home have been removed into foster care. Middletown officials have set up a memorial fund to support them in honor of their brother.