NEW YORK (AP) — A neurologist already facing charges that he raped patients in New York and New Jersey was arrested on new federal charges Wednesday alleging that he was a serial, sexual abuser of women who went to him for help with debilitating chronic pain. 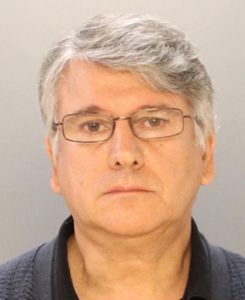 It described the doctor, now 63, grooming patients who were dependent on him for care and prescriptions to addictive opioids, turning back rubs and hugs into gradually more invasive physical attacks and sexual demands.

If certain victims refused to engage in sex acts, he retaliated by referring them to another medical provider that would not prescribe the same combinations or quantities of narcotics, the indictment said.

“The alleged pattern of abuse in this case is outrageous,” said U.S. Attorney Damian Williams said in a release. “Doctors like the defendant take an oath to do no harm. It is difficult to imagine conduct more anathema to that oath than exploiting patients’ vulnerability in order to sexually abuse them.”

A lawyer for Cruciani didn’t immediately reply to a message seeking comment. Cruciani, who lives in Wynnewood, Pennsylvania was arrested Wednesday morning in Pocono Pines, Pennsylvania, and was in custody pending an initial appearance before a magistrate judge.

Tullin, who saw Cruciani for years and said she was sexually assaulted repeatedly, said she was “deeply grateful” to federal prosecutors, who she said had “heard the victims and refuse to look the other way as so many others in this case have.”

“I have longed for the day he would be held accountable for these heinous crimes,” said Tullin. “It has been nearly four years since state charges were brought against him, yet there is no trial date in sight. It has been a living hell.”

Johnson called the federal charges a relief but said that the hospitals which employed Cruciani are “equally if not more responsible than him.”

The Associated Press does not typically identify people who say they are victims of sexual assault unless they grant permission, as Tullin and Johnson have done.

Cruciani was charged with five counts of enticing and inducing individuals to travel interstate to engage in illegal sexual activity. Each count carries a potential sentence of up to 20 years in prison.
The Ivy League-trained neurologist has been free on $1 million bail set in pending state criminal cases in New York and New Jersey.

Manhattan prosecutors charged him in May 2018 with 35 felony counts, including rape and aggravated sexual abuse. The cases have faced a series of continuances and delays. His next court appearance in Manhattan was scheduled for Dec. 9.

According to the federal indictment, Cruciani met with victims alone in an examination room, sometimes behind a locked door, in hospital rooms, a hotel or an apartment.

At times, he conducted purported breast examinations and vaginal exams of certain victims even though he was not a practicing obstetrician or gynecologist, the indictment said.
___
Associated Press Writers Michael R. Sisak contributed to this report. Rubinkam reported from northeastern Pennsylvania.