The Little Sisters of the Poor is a religious order that offers housing and compassion to the elderly in need.

And like many religious nonprofits their size, the Little Sisters offer health benefits to employees through a self-funded plan from a third-party insurer. But they refuse to offer contraceptive coverage through the plan because they say doing so would violate their religious beliefs.

Since 2013, different chapters of the Little Sisters have fought the Affordable Care Act’s contraceptive coverage mandate in courts around the United States. Each legal battle rests on the argument that the mandate violates the Religious Freedom Restoration Act, or RFRA, a federal law intended to ensure that “interests in religious freedom are protected.”

After years of court battles and bureaucratic maneuvering, the Trump administration implemented a rule in 2017 that gave the Little Sisters what they wanted: full exemption from the mandate.

Now, the Little Sisters are returning to the nation’s highest court to defend the exemption from lawsuits from state governments arguing the exemption is unconstitutional.

Without the exemption, the Little Sisters say they could face millions of dollars in fines for refusing to comply with the mandate, which would jeopardize their ministry. 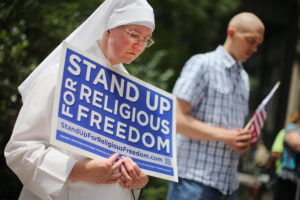 “They could be forced to close their doors and shutter these homes that they’ve run for 150 years,” University of Massachusetts School of Law Professor Dwight Duncan, who wrote a friend of the court brief in support of the Little Sisters for residents of the homes.

Others say the exemption goes too far by depriving women of their right to health care under the Affordable Care Act, also known as Obamacare.

“When your exercise of religious liberty harms other people, then it faces a constitutional limit,” said University of Virginia law professor Micah Schwartzman, who joined a friend of the court brief in support of the states fighting the exemption.

The controversy goes back to the early days of the Affordable Care Act when the Obama administration created its first set of exemptions for religious objectors, including one dubbed an “accommodation.” Through it, some religious employers could sign a form and give it to the third-party administrators of their plan, who in turn could provide contraceptive coverage directly to employees.

Since then, challenges to the mandate and the accommodation have gone to SCOTUS on two different occasions.

The first time was in 2014 with the Hobby Lobby decision. In a 5-4 vote, the Court held that forcing the family-owned craft store chain to pay for contraceptive coverage violated RFRA. But the court’s ruling only applied to for-profit entities, not religious employers like the Little Sisters. Women could still obtain contraceptives through the accommodation for third-party plan administrators.

Then in 2016, the Little Sisters and Pittsburgh Bishop David Zubik challenged the accommodation all the way to the Supreme Court. Instead of deciding the merits of the case, the justices vacated lower court rulings and directed the parties to come up with a compromise.

The Obama administration left the accommodation intact. Then, the Trump administration expanded the exemptions to a broader set of employers so the Little Sisters “would no longer be required to do something that they thought was wrong,” Duncan said.

The state of Pennsylvania sued to block enforcement of the exemptions, alleging they not only violated administrative procedures but would also cause people irreparable harm in violation of Title VII and the Constitution’s Equal Protection and Establishment Clauses.

A district court granted a nationwide injunction halting enforcement of the exemptions and New Jersey joined the lawsuit. The Little Sisters challenged the injunction all the way to the Supreme Court.

Although the case going before SCOTUS now mainly focuses on how the Trump administration came up with the rule, and whether the Little Sisters have the right to intervene in the case, observers say much more is at stake.

According to Schwartzman, this could be the beginning of a “long series of cases involving the question about how to balance religious liberty on one side and civil rights and other important legal benefits on the other.”