According to prosecutors, Holli Osborn, a registered nurse, shot Dr. Christopher Osborn three times in the head as he slept in the couple’s bed at their home in Dublin, Ohio, in 2018.

Osborn, 46, reached out to her father using her Alexa device in the early morning hours of July 18, 2018. She told him she’d blacked out and that when she woke up, her husband was dead. Osborn’s father reportedly believed his daughter was intoxicated. He then called police.

Gunshot residue was found on Osborn’s hands and eyebrows, and the gun used in the shooting contained her DNA. She was considered a suspect almost immediately, but has maintained her innocence. Osborn’s defense team insisted that police were simply not careful enough when they were present at the crime scene and that’s how residue ended up on her hands.

Prior to trial, Osborn’s attorneys filed a motion asking a Franklin County judge to suppress statements made by Osborn to police officers the night of the shooting. They argued she was too drunk to know she could refuse to answer questions and consent to a gunshot-residue test. That motion was denied. 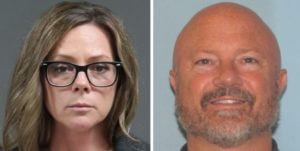 Osborn’s attorneys argued that not only was there lack of proof that Osborn killed Christopher Osborn, but she did not have a motive. She didn’t stand to benefit from his life insurance policy and had a large amount of debt.

Prosecutors alleged Osborn killed her husband because he had cheated on her early in their marriage, and she had been insecure and jealous since. The couple wed in 2016. It was the second marriage for both. Prosecutors also emphasized that the defendant’s excessive drinking had driven a wedge between the couple.

Throughout the trial, jurors got a window into the Osborns’ volatile marriage, including access to text messages that suggested Christopher Osborn may have been unfaithful.

On October 6, 2022, the jury convicted Osborn of two counts of murder with firearms specifications.

Osborn faces 18 years to life in prison. A sentencing date has not been set.