OKLAHOMA CITY (AP) — An Oklahoma appeals court on Thursday denied death row inmate Richard Glossip’s request for a new evidentiary hearing that his attorneys suggest would prove his innocence in the 1997 beating death of Glossip’s boss at an Oklahoma City motel. 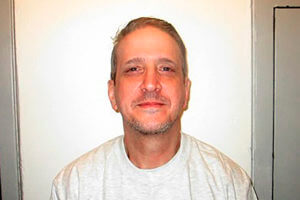 FILE – This Feb. 19, 2021, photo provided by Oklahoma Department of Corrections shows Richard Glossip. Oklahoma Gov. Kevin Stitt granted another temporary reprieve to death row inmate Glossip on Wednesday, Nov. 2, 2022, pushing his scheduled execution back until February 2023 so that an appeals court has more time to consider his claim of innocence. (Oklahoma Department of Corrections via AP, File)

Glossip’s attorneys raised several propositions in asking the Court of Criminal Appeals for a new hearing, including that he is factually innocent of the murder, the state destroyed vital evidence, his trial attorneys were ineffective and that he is intellectually disabled.

But the court noted that Oklahoma law doesn’t allow defendants to continue to appeal issues that have either been raised previously or could have been raised earlier but were not. The court also cast doubt on Glossip’s theory that his co-defendant, Justin Sneed, acted alone or with his girlfriend to rob and kill Barry Van Treese.

“The evidence he proffers to support this theory consists of affidavits from jailhouse informers, drug dealers, exotic dancers and residents of the Best Budget Inn,” the court wrote. “These affidavits do not provide the clear and convincing evidence that Glossip would like this court to believe.”

Glossip, who has long maintained he is innocent in the murder-for-hire killing of Van Treese, has narrowly avoided execution several times, including in 2015 when his lethal injection was called off at the last minute when the wrong drug was delivered to the prison. That drug mix-up led to a moratorium on the death penalty in Oklahoma that lasted for more than six years before the state resumed executions last year.

Earlier this month, Oklahoma Gov. Kevin Stitt issued Glossip another temporary reprieve from his scheduled Dec. 8 execution to give the Court of Criminal Appeals more time to consider his last-minute appeals. A separate appeal that alleges prosecutorial misconduct and an attempt by his co-defendant Sneed to recant his testimony, is still pending with the court.

“We still have another petition pending with the court setting forth Sneed’s desire to recant his testimony against Rich and, most shockingly, documenting the prosecutor’s serious misconduct in coaching Sneed to change his testimony in the middle of trial,” Glossip’s attorney, Don Knight, said in a statement. “Our fight to free this innocent man will continue, and we remain optimistic that truth and justice will prevail, both for Rich and the citizens of Oklahoma.”

Prosecutors acknowledge Glossip did not kill Van Treese, but maintain that he paid Sneed, the hotel maintenance man, to do it. Sneed, who received a life sentence but was spared the death penalty, was a key witness in two separate trials in which Glossip was convicted.