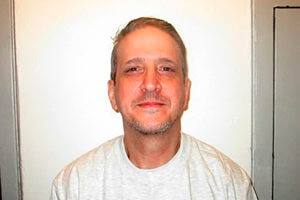 “This stay is granted to allow time for the Oklahoma Court of Criminal Appeals to address a pending legal proceeding,” the order states.

A Stitt spokeswoman declined to comment on the governor’s decision, which also means that a clemency hearing before the Oklahoma Pardon and Parole Board that was scheduled for next week will be delayed.

Glossip asked the Oklahoma Court of Criminal Appeals for a new evidentiary hearing following the release of an independent investigation by Houston law firm Reed Smith that raised new questions about his guilt. The firm’s report did not find any definitive proof of Glossip’s innocence, but raised concerns about lost or destroyed evidence and a detective asking leading questions to Glossip’s co-defendant, Justin Sneed, to implicate Glossip in the slaying.

Sneed admitted killing Van Treese but said he did so at Glossip’s direction. Sneed was sentenced to life in prison and was a key witness against Glossip.

“We are extremely grateful for Governor Stitt’s thoughtful and compassionate decision to grant a 60-day reprieve for Rich’s execution date, and to do so sufficiently in advance of the August 23 clemency hearing to spare everyone the trauma that such a hearing entails,” Glossip’s attorney Don Knight said in a statement. “This will also spare Mr. Glossip from beginning the cruel execution protocol for a fourth time. We note that new evidence of innocence continues to be uncovered on an almost daily basis, including compelling evidence of admitted killer Justin Sneed’s desire to recant his testimony accusing Mr. Glossip of orchestrating the murder of Barry Van Treese.”

Glossip, now 59, has long maintained his innocence. He has been scheduled to be executed three separate times, only to be spared shortly before the sentence was set to be carried out. He was just hours from being executed in September 2015 when prison officials realized they had received the wrong lethal drug, a mix-up that helped prompt a nearly seven-year moratorium on the death penalty in Oklahoma.