A custody dispute between two families that erupted into the massacre of eight people in rural southern Ohio started with a plan to kill just one of them, a young mother refusing to give up her daughter, a prosecutor said Monday.

But just months before the killings in 2016, the family behind the plot decided to kill everyone who could point the finger at them, the prosecutor said during opening statements of the first trial in the slayings.

Now six years later, George Wagner IV faces the death penalty if he’s convicted in the slayings of the Rhoden family near Piketon.

His younger brother, Jake Wagner, last year pleaded guilty to shooting five of the victims, and is expected to testify against his brother as part of a deal with prosecutors that spared him from being sentenced to death.

Their mother, Angela Wagner, also pleaded guilty to helping plan the slayings, and is also expected to testify. Jake and George’s father, George “Billy” Wagner III, has pleaded not guilty. He likely won’t go on trial until next year.

Special prosecutor Angela Canepa did not accuse George Wagner, 30, of shooting anyone in April 2016, but she said he took part in planning, carrying out and covering up “one of the most heinous crimes in Ohio history.”

He was with his brother and father when they drove to three separate locations where all eight were killed, went inside with the pair and helped his brother move two of the bodies, Canepa said. 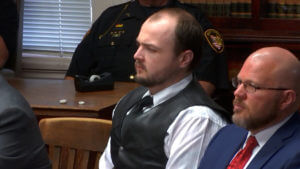 Some of the victims were treated as “collateral damage” by the Wagners, Canepa said.

“They knew that there might be other people there and agreed they would need to be killed too,” she said. “People they had no issue with, they were willing to kill them indiscriminately.”

Defense attorney Richard Nash said George Wagner is not like the rest of his family and had nothing to do with the killings.

“There are certain things in this life we can’t control. One of those is your family name,” Nash said. “George cannot help he’s a Wagner. That does not make him a murderer.”

He said Jake Wagner will testify that his brother didn’t take part in the planning, didn’t destroy evidence and didn’t shoot anyone. “Everyone had a motive in this case except George,” Nash said.

Authorities say the shootings of seven adults and a teenage boy stemmed from a dispute over a young girl that Jake Wagner had with one of the victims, 19-year-old Hannah Rhoden.

The two families had been close for years, but Canepa described the Wagners as being obsessed with gaining control over the girl.

The family had pressured Hannah Rhoden to sign away custody, but she vowed in a Facebook message sent four months before the massacre that “they will have to kill me first,” Canepa said.

Jake Wagner told investigators he first pushed back against his parents when they talked about killing Hannah Rhoden but later relented, the special prosecutor said. They eventually settled on killing four of the family members because they believed the girl was being raised around people who were dangerous, Canepa said. 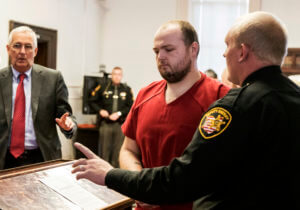 FILE – George Wagner IV, center, is escorted out of the courtroom after his arraignment on Nov. 28, 2018, at the Pike County Courthouse, in Waverly, Ohio. Opening statements are expected Monday, Sept. 12, 2022, in the death penalty trial of Wagner, indicted for his role in the death of eight Ohio family members. (Robert McGraw/The Chillicothe Gazette via AP, Pool, File)

The Wagners spent three months planning the massacre, buying masks, ammunition and a device to jam phone signals, Canepa said. The two brothers even dyed their hair in the week leading up to the killings, she said.

Several discoveries, Canepa said, led investigators to the Wagners including a shell casing found outside the Wagner’s home that matched one from a gun that killed five of the victims.

Jake Wagner told investigators he fired the first shot the night of the killings, but it was his father who killed the first of the eight, Chris Rhoden Sr., according to Canepa.

The special prosecutor said that Jake Wagner told investigators that his father then cried out “I just shot my best friend.”