PORTLAND, Ore. (Court TV) — A jury has found Nancy Crampton-Brophy guilty in the 2018 death of her husband, Dan Brophy. The defendant was charged with murder in the second-degree with a firearm – constituting domestic violence. Sentencing has been scheduled for Monday, June 13.

Students at the now-closed Oregon Culinary Institute found the body of Chef Daniel Brophy on June 2. He had been shot in the back and chest. 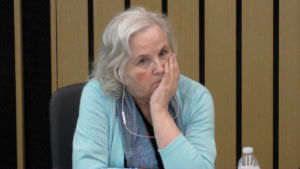 In this image from video, defendant Nancy Brophy sits in court on Monday, April 4, 2022, in Portland, Oregon. (Court TV)

As the author penned a tribute to her late husband on social media, police began their investigation.

Authorities say the couple had fallen behind on their mortgage. Nancy stood to inherit more than a million dollars from his insurance and worker’s compensation policies.

Surveillance video surrounding the culinary school revealed a minivan similar to the one Nancy drove the morning Daniel was killed. Investigators say Nancy claimed to be home during the killing.

A search of Nancy’s computer revealed more suspicious activity. Police say they found evidence of gun part purchases. They also discovered an eyebrow raising article she had written titled “How to Murder Your Husband.”

Her defense will likely argue the article is tongue-in-cheek and not meant to be taken seriously, but the state prosecutor isn’t joking.

Nancy, now 71, has been charged with second-degree murder. She maintains her innocence and has pled not guilty.