SALINAS, Calif. (KSBY) – The Kristin Smart murder trial picked up again Wednesday with the testimony of Trevor Boelter, who had multiple encounters with Smart at a house party on the night of her disappearance.

Smart was last seen on her way back to the Cal Poly dorms after leaving an off-campus party over Memorial Day weekend in 1996.

Fellow student Paul Flores was the last person to be seen with Smart. He’s now on trial for her murder, along with his father, Ruben Flores, who is charged as an accessory after the fact, accused of helping hide Smart’s body.

Boelter vividly remembered Kristin as a very attractive, very pretty woman at the house party. He also described her as flirtatious.

He said Kristin walked up to him, introduced herself as “Roxy” and gave him an “open mouth” kiss. He said she grabbed his hand and took him to the bathroom.

Once inside the bathroom, Boelter said the mood changed. He recalled Kristin asking him twice if she was ugly to which he said, “no.” She then asked him who at the party she should spend the night with.

Peuvrelle asked Boelter if he recalled smelling alcohol on Kristin. He said he didn’t. 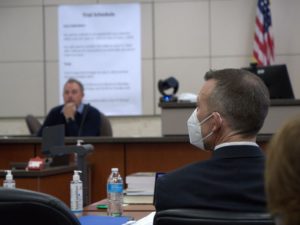 Boelter said Kristin told him she needed to go to the bathroom so he stepped out.

Once outside, Boelter said a guy with “authority in his voice” asked him what had happened in the bathroom with Kristin. Boelter said “nothing” and the guy laughed.

He described that man as having big blue eyes, blond hair and being shorter than him.

Boelter identified the man in the courtroom as Paul Flores, although he said he didn’t know him at the time.

Boelter described a second interaction with Kristin in which he stepped in when she seemed uncomfortable by the presence of another man. That man was not Flores.

The last time Boelter said he saw Kristin was as he was ready to leave. He said she insisted on talking, grabbed his hand and took him to the backyard. He said Kristin kissed him again but he pushed her away. He said he noticed she was stumbling as she walked away.

Under cross-examination, Paul’s attorney, Robert Sanger, questioned Boelter about why he failed to mention the bathroom encounter with Paul Flores in interviews with detectives in 1996.

Boelter said he was only asked about Kristin and what happened in the bathroom. Plus, he didn’t know at the time that the man he had interacted with was Paul Flores. He added that those interviews were over the phone so no photos were shown to him.

The defense pressed Boelter on how much alcohol he’d had to drink that night but Boelter insisted that he does not recall being drunk.

Peuvrelle asked Boelter if he ever saw Kristin and Paul talking at the party. He said no.

The next witness called to testify was Eric Wilkins who attended the same party with his roommate.

Wilkins struggled to recall specific details about that night but said he remembered seeing Kristin lying on the front yard of the house by a bush.

He said Kristin seemed passed out, not dressed for cold weather and that she wasn’t speaking coherently.

Wilkins did not remember the conversation they had with Kristin but did recall telling her to go inside the house. 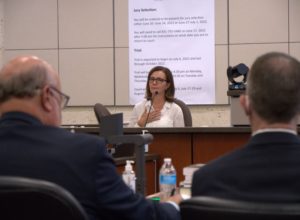 Jennifer Medeiros, who lived across from Kristin Smart’s dorm, testified Aug. 3 about when they noticed Smart was missing. (Court TV)

The next witness called was Jennifer Madeiros who lived in the dorm across from Kristin Smart.

Madeiros said she, Kristin’s roommate and her friend, Margarita, all noticed Kristin was missing on Saturday morning and they became concerned.

Madeiros said she called San Luis Obispo police on Sunday but was referred to Cal Poly campus police. She said campus police told her it was Memorial Day weekend, so if Kristin didn’t return on Tuesday, then she should call back.

She said she called both agencies again on Monday.

Choking back tears, Madeiros said, “The feeling of hopelessness grew each day.”

Madeiros went to class on Tuesday and when there was still no word from Kristin, she called campus police and a report was taken.

Next to testify was Derrick Tse, Paul’s roommate at the time of Kristin’s disappearance.

The prosecution asked Tse to describe the layout of the dorm and his plans for Memorial Day weekend of 1996.

Tse left for Oakland on Friday night and returned on Tuesday.

Upon his return, Tse said he heard the buzz about Kristin’s disappearance and asked Paul about it. 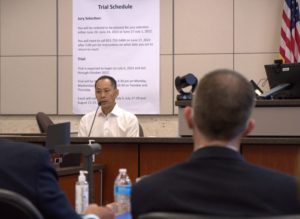 Tse said Paul told him he saw Kristin at a party, she went missing after the party and that he was the last person to see her.

Tse said, “I made a joke — you probably did something to her. He joked back, ‘yeah, she’s at my mom’s house right now.’”

Although Tse said he never partied with Paul, he did recall seeing him after he’d been drinking and said Paul would become more aggressive and loud.

During cross-examination, the defense asked Tse if he noticed anything unusual such as odors or stains when he returned from his Memorial Day weekend trip to Oakland.

Tse said he didn’t notice anything different in the dorm they shared.

Testimony is expected to continue on Thursday. Court will not be in session on Friday.

The trial, which is expected to last into October, is taking place in Salinas after being moved out of San Luis Obispo County.