NASHVILLE, Tenn. (WTVF) — It’s been five days since former nurse, RaDonda Vaught, was convicted on two counts of the death of a patient after a medicine mix-up. The verdict has inspired a Change.org petition that only seems to grow by the hour.

The number of signatures was over 161,100 Thursday morning and mostly consisted of healthcare workers demanding that Vaught is granted clemency.

No matter how many signatures the petition garners, actually granting clemency is up to one man in Tennessee: Gov. Bill Lee.

The governor is going against the verdict of 12 people who arrived at a unanimous verdict, that’s something that’s taken very seriously in the criminal justice system, as well as the executive branch of the government,” said Leonardo.

Even if Vaught is granted clemency, sentencing must take place first. The maximum sentence Judge Jennifer Smith could hand down would be six years in prison, but because Vaught is a first-time offender, Leonardo said probation is much more likely.

Either way, given the nature of the charges, Vaught will be labeled a convicted felon for the rest of her life.

“A lot of times when you’re convicted of a low-grade felony, you’re eligible for expugnable probation, or to have that removed after you complete a successful period of probation, you can have that dismissed,” Leonardo said. “In elder abuse cases, as of 2019, they’re no longer allowing that so this will be a felony conviction on her record.” 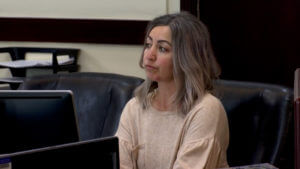 RaDonda Vaught listens in court during her trial in Nashville, Tenn. (WTVF)

“The justice system still needs to run its course. With any request for clemency, the Governor reviews each case individually through the established clemency review process,” Lee’s spokesperson Casey Black said.

According to Black, the governor relies on the Board of Parole to preliminary review requests for clemency in non-capital cases.

Once a criminal defendant is found guilty of a crime and sentenced, the defendant may apply for clemency through the Board of Parole.

This story was originally published March 30 by WTVF in Nashville, an E.W. Scripps Company.